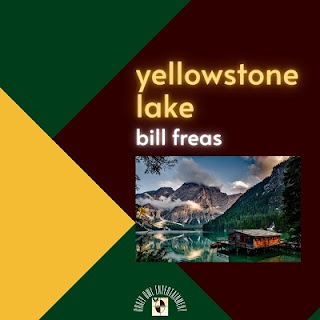 One of the most scenic albums to be released in 2021 has to be this latest creation by Bill Freas entitled Yellowstone Lake; this gentle amalgam of a multi-instrumental nature, with keyboards and a symphonic backdrop, courtesy of The Cottage City Symphony Orchestra is simply idyllic.

Starting with the ebullient Sunset Majesty and leading into the almost tribal Incantation of the Elk, here is an album that will cater for the tastes of all who love really crafted and well worked instrumental music that embraces the world of nature.

The album is packed with colourful offerings and has 10 tracks that create the compilation, such as Violet Valley Chorale, which sets the scene so beautifully, one of wide open vast realms that slope up and down, and one can feel the embracing wind all around us, and then a rhythmic and almost pulsating composition can be found on Moonscapes, one that manifests an almost addictive sense of energy.

The penultimate offering would be one of my personal favourites and called On Wings of Eagles, the cry of creators messenger can be heard from the off, and the floating keyboards hover with respect, the added chimes and vocalisations give the piece both depth and a sense of ethereal allure.

This wonderfully charming release ends with the track Lakeside, in Stride, a percussive beat and an almost chilled rhythm lead us out of the album with a fine chilled vibe.

Yellowstone Lake by Bill Freas is a graphic novel of music, put together to represent a place of natural beauty and in doing so, Freas has created an album of the same elk, no pun intended. Bill Freas has manifested something quite unique and incredibly compelling here, and as such Yellowstone Lake should appeal to all who seek good music, which reflects a natural theme, within its musical boundaries.

Posted by Steve Sheppard at 1:21 AM