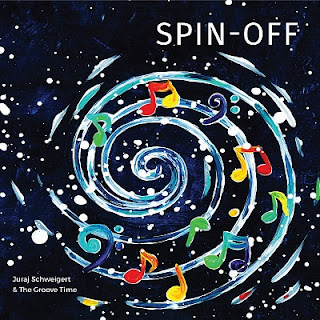 To look at this album as just another blues release would be a vast understatement, and a gross undervaluing of the product we now know as Spin-Off by Juraj Schweigert & The Groove Time, here you will find some of the most inventive music in this genre your ever likely to hear, and the Slovakian Blues Harmonica performer, will now take us on a journey that will open our minds and increase out awareness of the possibilities within this style of music.

The opening piece is a wonderful funk out and called Nobody's Talkin', which would make any concert opening piece with ease, the rasp like vocals, the driving blues ethic, and the fluent harmonica go to make this one of my favourite tracks off the album.

The bass breaks us into this next piece and called Spin-Off, this is of course the title track and one that also adds a little Jazz into the mix as well, which to be honest I find quite appealing. The percussive force of Matej Štubniak (Bass) and Juraj Raši (Drums) are a real engine room to compliment the harmonica of Schweigert, and the amazing screaming Hammond of Tibor Feledi.

As we move onwards we come across an addictive little composition entitled Every Four Seconds, which for the first time takes us across the oceans to a world of Reggae music, Bass is king in Reggae, and since I have had the good fortune to have travelled to Jamaica I should know. Here we have a fascinating arrangement, as we can cross the boundaries of Swing, and bring the Blues into the mix as well.

The Harmonica of Juraj Schweigert is sublime, and partnered with the bass of Matej Štubniak doubly so. Another favourite track of mine would be one that contains both and a wonderfully bluesy guitar (Zsolt Szitási) and called Stay With Me.  This is a wonderful slice of modern blues, and takes me back to the good old days of Gary Moore, in mood and feel.

She's Right is the track that illustrates to us that we have arrived at the half way marker. Once more Juraj Schweigert & The Groove Time bring us prime blues, but almost adds a little Rock n Roll into the mix too, and with a clever little Latin percussive methodology into the mix as well, this has to be one of the cleverest performances on the album.

From one style to another we go, whilst the core of blues stays the same, we take another ride on this roller coaster of genre hopping with the band, as we now enter the world of Bluegrass, and listen to Straight Back. The banjo and harmonica is a combination that is as rare as sunshine at night, but it works incredibly well on this track, one that is as happy as a Friday night on the town.

Gruvgrass is up next and the mid-western theme is continued with a truly masterful performance on harmonica by Juraj Schweigert, who at times has such a skill set to make his beloved harm, almost sound like a violin. This crafted offering contains a plethora of masterful performances, but this almost free form composition is driven by a stunning presentation on drums by the quite breath taking Juraj Raši.

Once we arrive at the musical world of Shoelaced, we have return to the funky essence of the opening piece, this though is a lighter and even smoother bluesy offering, and contains a wonderfully powerful brass segment that is simply delectable, the bass here with the vocals control the narrative of the song, and making it for me another stand out track from the release.

We now arrive in the deeper waters of the album, and a wonderfully commercial feel to the next offering is laid bare before us and called Fix Me Up, this would become another personal favourite of mine and at times bore a little similarity to 90’s blues soul performer Roachford in flow and composition, one must pay homage to the classy vocals and harmonies in this very classy song as well.

The penultimate offering is Miss Chief, this ingenious offering has to be one of the most inventive and artistic songs off the album, the piece itself has great movement and originality, and is strangely addictive for all the right reasons, this is one of those pieces that you will return to many times over, just to take in all the clever little nuances contained within that you may have missed first time around.

It’s always best to finish with a flourish, and the Juraj Schweigert & The Groove Time certainly do that on Drivin' Home. Classy blues harmonica, a funky guitar, and a shuffle you will never want to end, but never the less a track that is perfect to bring this smart and intelligent album of great tracks to a conclusion.

Spin-Off by Juraj Schweigert & The Groove Time has to be one of the most inventive collections of superb bluesy music I have heard for years, if you like your music vibrant, exciting, and with a willingness to cross genres at a mere whim, then this is an album you must simply have in your ever expanding collection at all costs.

Posted by Steve Sheppard at 1:48 AM