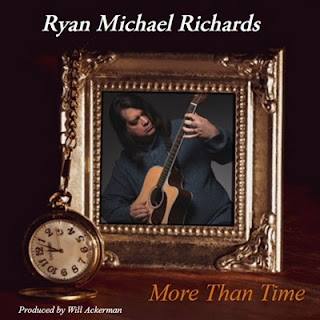 Ryan Michael Richards is a unique acoustic guitar performer, he produces rich and textured compositions, but also narrates the melody and arrangement so well, that you can literally hear lyrics within your mind as he performs, this skill set is masterful and allows the listener to conjure up their own musical journey and imagery as they drift within the tones of delight.

A fine example of this is the ever onward offering entitled Moving Forward, a steady and purposeful narrative is employed here, and a clever use of pause as well; the fluency of this piece makes this track the most perfect beginning point of the album.

At Your Leisure is one of those pieces that is so very beautiful to listen too, listen to the repeating motif on guitar as well, it is so beautifully crafted and escalates brilliantly as it weaves a tale of lyrical intent throughout the track. This song is further enhanced by the talents of Premik Russell Tubbs and Michael Manring.

At the mid-way point we come across a track called May I Have This Dance? This blissfully includes the genius that is Charlie Bisharat, and those strings never sounded so good, the symbiotic partnership with Bisharat and Richards here is sublime, they seem to dance from one segment to another with consummate ease, on a track that is as warm as they day is long.

One my favourite songs would be the penultimate offering entitled Friday At Five. There is a slight mournful repose here that cannot be denied, the elevation and tempo of the piece is generally more powerful than perhaps you would expect, which is partly what made this track so appealing to me. Richard’s guitar here is really intense at times, and that grabs the attention of the listener with ease.

The album finishes with the perfect ending piece entitled Timeless. The composition is indeed that, and given further energy by the returning Russell Tubbs on brass, simply idyllic, and without doubt the best way possible to leave this very chilled collection of smooth compositions.

More Than Time by Ryan Michael Richards is a blissful sojourn into the world of Acoustica, and never a better time was spent, than listening to this new offering. Richards has such a calming performance style, but one that manifests a story within each composition thus created, this is one of those albums you would be foolish to miss out on, and as such it is one that is utterly recommended.