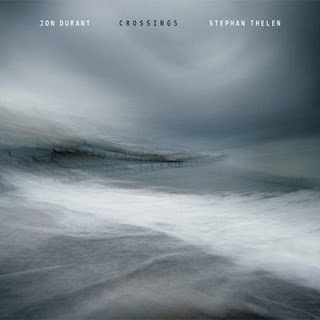 The dualistic guitar paring of Jon Durant & Stephan Thelen meet up to bring us a sparkling and powerful new album entitled Crossings, this is something I found deeply fascinating as I have been using guitar effects and sounds in my own music, so it was a lesson in crafting a performance to manifest something completely fresh and intuitive for the listener.

The music has been somewhat inspired, if that is the right word, by the numerous lockdowns we have all see and been a part of in the last year, the mood filled opus of track one sets the scene perfectly ,Vol de Nuit and its long form majestically styled prowess, almost borders on the boundaries of progressive rock at times.

That aforementioned statement is increased further on the offering entitled Mise en Abyme, the floating motifs created a sublime eleven minutes plus of artistic brilliance, laying one piece within another, this is a tranquil yet very addictive musical experience that constantly keeps evolving as it plays, it is one of those arrangements that you could listen to on many occasions, and still keep coming back to examine those ever so creative nuances further.

This is a very classy album indeed; it is almost like a progressive cross between Harold Budd and Paul Speer, the amazing title track lays down a most pleasant tapestry of sound, Crossings is a mixture of musical art as has never seen the like of before, the depths of its creative manifestation is simply incredible, and is the longest track on the album at well over twelve minutes.

Seven compositions lay within the misty halls of this album, and each one is a sojourn all of its own. This is a musical ambience that has been birthed with textures so specific, and artistically moulded from the genius of two, and into the arms of each and every one of you, listen to the last track off the album entitled Infinity, this work alone is a dimension of sound on its own right.

Crossings by Jon Durant & Stephan Thelen is a master piece of minimalistic ambience and then some. The sheer imagination required to have expressed such a body of work as this is amazing, the guitars of both artists bring their own musical mastery to the table, and they build a world where one can literally drift away in an almost meditational styled reverie.

Posted by Steve Sheppard at 9:28 AM