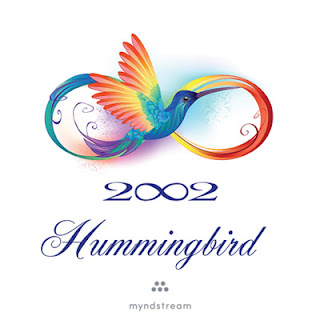 I postulated a while back on the health of the new age genre, and wondered what its current status is; thankfully I can now state without a shadow of a doubt that it is alive and well, and flourishing, especially after a shot in the arm from the world’s greatest new age band 2002, by the release of their latest album Hummingbird.

This journey of utter colour and smooth textures starts with the abundant beauty of Rainbow Cove, which in my view must be the best starting composition I can ever remember on an album of this style, its fluent, graceful, charming, and its multi-instrumental nature simply sublime.

The Copus family are well versed in the skill set of creating a compelling musical narrative; now they are three young Sarah only adds so much to the trio. The Harp here on Walela is transcendent, the string sections and symphonic backdrop simply mystical, and very redolent of a movie theme, can such beauty be before me? Yes it can, via this amazing new album called Hummingbird.

The mood filled guitar of Randy Copus brings us Gathering the Clouds, a track that manifests more and more growth and progression as it goes, there is a native feel to this piece that I adore so much, the flute of Pamela Copus brings us that image, and the strings just carry us away on a tone of delight and bliss.

Sunlight in Rain hovers like an expectant and heavy cloud in late October, the radiance of a long past summer has gone, but the remnants of those beautiful days linger on, and then showers upon the surface of the Earth fall, like tears from a new born child; this is a breath taking performance by the band, the combination of keyboards, strings and harmonics is just mesmerizing.

The half way marker is reached by the arrival to the land of the Sacred Mountain. This is the traditional playground of the band and this full flowing and lush style has blessed our weary ears for years, as we approach the midway segment of the song we are gifted some of the sweetest vocalisations your ever likely to hear.

I thought I at first had gone back to the 30’s and had a feeling that there really is no place like home when I first heard Through the Rainbow. The band have manifested a wonderfully warm and all-embracing composition here, this is like a musical arm around the shoulder, or the equivalent of a warm bowl of musical chicken soup, almost a lullaby, certainly film score, but at all times startlingly brilliant, and deeply caring in composition and arrangement for each and every one of us, oh yes, and of course your little doggie too.

Courting the Moon, there is little in the night sky that holds my attention than the white globe we stare at during the darkness of the night, and sharing a moment of love under it is something both Chrissie and I do on a regular basis, little did I know that 2002 would create a soundtrack for that moment, and an amazingly beautiful one at that. The ambience of this track is deeply felt and the keyboards here deeply emotional, I would say this is music to cry happily to.

We are floating into the deep waters of the album now, and as we do so we come across another stunner entitled Jasmine Rain. I have a Jasmine plant, just need some rain now, and the scent from the Jasmine is so redolent of summer and all that warmth of compassion that comes from it. Once more 2002 manifest a segment in time, a moment that may flicker like a sparkling star at night, but done so with such an amazing skill and crafted purpose; the combination of artistic endeavours from the Copus families multi-instrumental genius, is felt so strongly here on this piece.

The penultimate track from the album is now up and entitled Wind Dancer, the piano starting ethic reminded me so much in mood and feeling of David Lanz in texture, the symbiotic nature flowed so beautifully with the combination of string and flute to bring us, the ever eager listener, a wonderful tapestry of music as our last but one offering.

The last track on the album, and I almost don’t want to write it, as it is the end of the release, because you really will want the experience to last for an eternity, anyway, I must, and therefore I give you First Day of Spring. What a clever and thoughtful way to end with a track that could signify the beginning, a little Enya feel at times, but as is always the case 2002 as a band, warmer in composition and full bodied in arrangement, but how can this just not be the best symphonic moment of magic to leave any album with.

It is hard to explain this, but whilst writing this review I haven’t spoken, drank, or moved, and barely even breathed, and only just realised I hadn’t even saved my work, this is how amazingly great this album is, I kid you not, this is without doubt the best instrumental album that 2002 have ever created. Hummingbird will probably go down in musical history as one of the best examples of 21st century New Age music there is, as it really doesn’t get any better than this.

Posted by Steve Sheppard at 3:33 AM