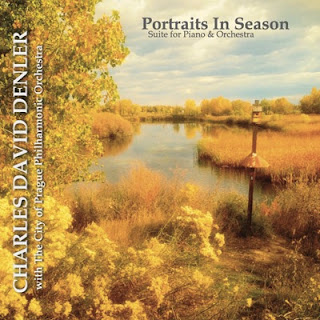 The theme of this stunning album is right down my street, or should I say my walk in the woods, in fact I have created a show for seasonal nature music on One World Music Radio called Nature Trails, and I can see by listening to this outstanding release that a much from this album will be featured there as well.

This release is what I call a magnificent representation of the movement of the seasons of the year, and taking inspiration from his childhood days in New England, whilst manifesting a symbiotic partnership with the City of Prague Philharmonic Orchestra.

My senses took me to utterly transcendent pieces like Woodland Flowers of June; one of my favourite months back in the old country, and for me there was a certain flavour of Vaughan Williams about its construction that pleased me so much within this hazy summer memory.

Autumn's Last Leaf had that mournful repose, but one that saluted its summer greatness, and gave energy to the falling leaf of destiny, so that it may become great again next year. Denler’s sublime piano performance is only eclipsed by the construction of such a classic creational arrangement; this is one to remember for a season to be sure.

The quite mournful, but utterly delightful A Winter's Memory brought a tear to my eye and a lump to my throat, this is a composition packed with emotive nuances and emotional structures and climaxes and reminded me greatly of the UK composer Eric Whitacre, in its artistic outpourings of creativeness and melodic mastery.

The album concludes initially with a short form piece entitled Season's Finale, a fine example of how to sum up a whole project in just 2 and a half minutes, and then Denler gives us four variations of a theme to enjoy, including such beautiful reveries as Spring Variation: Spring Meadows, Summer Variation: The Water Garden, Fall Variation: Leaf on the Wind, and Winter Variation: Winter's Repose, all of which are created with an intelligent hand, and loving heart.

Portraits in Season Live by Charles David Denler in my view is the artist best work to date, I may be biased, but I was born into the arms of nature, and simply adore magnificent music that reflects just how beautiful, in its own way, each season is, and I personally salute anyone who can conjure up such mastery, and as Charles David Denler has just done that with Portraits in Season Live. I now urge you to embrace the vision, its creative beauty, and the utter skill manifested in its creation, by purchasing a copy, your emotions will love you for eternity.

Posted by Steve Sheppard at 7:19 AM