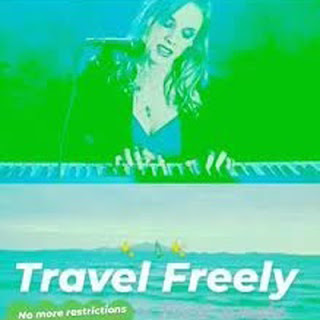 There is something utterly unique about the performances upon this uplifting album entitled Travel Freely by Patricia Patrise. The album borders on several genres, but seems to balance itself beautifully as it flows, Patricia’s uniqueness is one that she can sing in Polish and English, and here she manifests something truly new, fresh and innovative.

Compositions like the opening piece, and to all tense and purpose the title track TF4, hold a sublime beat and a crafted use of major and minor chords, her keyboards creating a clever build and progression into a semi-pop, almost new age styled vocal.

On the track Languages we have a mysterious progression that is addictive and compelling, the hovering intensity partnered with the delicate vocals and chilled back beat have an almost reflective energy about its creation.

We now move deeper into the weave, and as we do so we come across a song entitled simply E4. Pristine vocals hover across a landscape of a gently roaming keyboard, one that slowly builds to eventually manifest a depth of soul by the latter half of the track.

One of the gentler tunes within this collection of unique tracks was one of my personal favourites and entitled Inspiration. The flow was natural and creative, and the symbiotic performance between vocals and keyboards brought an almost Enya like performance, here is a track that should indeed be released as a single.

We now arrive at the half way marker and as we do so we come across another addictive slice of cleverness entitled Screens. A crafted manifestation utilising a rhythmic beat and a little electronic magic, which leads us perfectly into the next piece named Bangladesh, which in my view may well be not only the best track on the album, but also a composition that is sung with such harmony and positivity that is really raises the spirits, the full flowing keyboards gift us a treat of sheer magnificence.

TRIP is a horse of a different colour; an almost retro-pop vibe resides within this arrangement, the soul and heart of the song is true mixture of good cheer and possibilities, the chorus and melody is also something to enjoy.

The beat on this next track Layover is reflective in its content, and reminds me of the 90’s, its mysterious floating vocals almost tease us to move closer, in a siren like composition that calls to us from across the seas of musical time.

Our penultimate offering could well be another classic in years to come, as Holidays has a sensitive and reflective manifestation to its ever onward narrative. There was something quite emotive and moving about this piece that resonated with me, again the major minor interplay here was incredibly addictive.

We arrive at the last track of the album and this final parting gift is called For the Women, this is without doubt the most powerful offering off the release and the songs flow at times is quite tribal too, and is a piece that gathers an intensity and depth as it flows, a clever way indeed to conclude the album.

Travel Freely by Patricia Patrise has to be the single most unique body of work that has crossed my table this year, this is one of those albums that really has something for everyone contained within its musical realms, and it is certainly one of those releases that will hook you in until its final conclusion.

Posted by Steve Sheppard at 8:19 AM