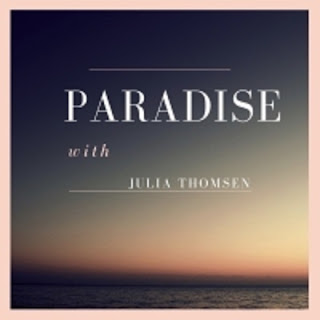 Never before has such a tender album been created that says so much in such a short period of time, Paradise by Julia Thomsen is a short form album where the subject is utter beauty and transcendent bliss, within the refrains of a piano and added instrumentation.

The album opens with a piece called Touch, it is as sensitive as the title sounds; its delicacy and the accompanying strings that dance with it are simply emotionally crafted and very pristinely manifested, whilst the title header Paradise has a mood created from a deep longing, the symbiotic partnership of strings and piano are simply beyond beauty here, and this track alone is enough to move you greatly.

The flowing structures of Thomsen’s piano are receptive and impressionable, pieces like Spring Step may be small in stature, but are full of musical grace and texture, whilst Reflective Nature would be my favourite from the collection, the repeating motif wended its way to my heart, and never left.

Serene Day would paint a musical picture of a peace-filled landscape, where all is green and abundant, and Sakura, the longest piece off the release at just less than two minutes, brought us a performance of both grace and texture, the partnership of strings and piano here were never felt more deeply and caringly than on this offering.

The last offering is entitled Village Life Live and the album concludes with a musical narrative that almost dances its way off the stage, the tangible tapestry created here was extremely attractive.

Paradise by Julia Thomsen is scenic glance across valleys and musical meadows, its charm filled narrative is magnificent, my only wish would have been one that my sojourn within this lovely realm had been a little longer, but what I sampled was a blissful reverie of very pleasing multi-instrumental magic, and a nice sanctuary of the soul to rest within.

Posted by Steve Sheppard at 7:53 AM