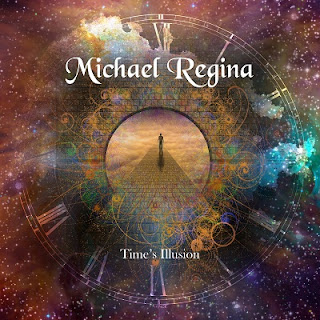 I have followed the talents of Michael Regina for a few years now and enjoyed the many musical reveries along the way, one that would take me back to 2018 and the A Far Better World album. One must say that the excitement is building now as we begin another journey with the artist and his latest release Time’s Illusion.

The opener is exceptional, it is called The Chosen Few and has a build akin to Floyd on Shine On you Crazy Diamond and then natural sounds lead us to an undeniable earth beat, the flowing synths of the most charismatic opener are irresistible and some of the best I have ever heard from the artist.

Scan your radio right now, add that resultant audio capture to a glorious electric piano and you get the beginning of this next superb piece entitled Frequencies. There is subtle but beautifully composed rhythm to this track, one that would feature well in the chill out genre too.

There is a real mood of reflection on this next track from Regina called Days Gone By, the keyboards and synths laydown a feeling of a carpet of memories being rolled out upon the ground of forevermore, and a composition that reminded me greatly of US based instrumentalist Holland Phillips.

Time and Again nudges us closer to the half way marker, and the tick and tock of the relentless clock sets the scene for a powerful yet tempered piece that had a wonderfully chilled inner vibe to its construction, one that is smooth, fluent and very easy on the ears indeed.

Noctis Decus fulfils the night time perambulations of the mind with a dream like offering from Michael Regina, there is much to like here as the percussive elements weave a tale of intrigue and fascination with the keyboards.

The tor of musical pleasure has been breached as we enter the second half of the album with the arrangement Remembrance. After the build and synth progression of the opening few bars, we are gifted a beat so empowering and forceful that it wouldn’t be unlike that of a soft rock track in its resultant texture.

On Unity Quest we have a composition that builds with a gentle reflective intent and adds an almost regal poise to the arrangement, the percussive elements and pleasingly weaved synths and keyboards, compose something as close to a movie track as possible, and makes for me the most unique offering from the album.

We now move into the deeper waters of this release, and as we do so we come across a track entitled Smile Through Sorrow. The sadness is palpable here and the tones manifest a visual image of walking through a lonely forest at night in the depths of a deep unrelenting sorrow, it is always hard to portray this style of reflection musically, but here Regina progresses this arrangement so beautifully that one may even find hope at the end of the track.

A Traveler's Tale is a return to the classic contemporary waters of artist like the aforementioned Holland Phillips of even Timothy Wenzel, both artists very proficient at their skills; we can now add Michael Regina to that list of master creators of mood felt music, this track specifically has a fantastic sense of movement within its manifestation, one that shows a permanent onward direction from a time worn individual, this is musical art in motion at its very best.

Our penultimate piece is bathed in a mood of angelic apprehension, from a world of ethereal escapes and is called Shrouded in Light. The organ was delicious and much appreciated; the upbeat tempo and energy of the song created a dominant and robust feeling from deep inside of the very soul of the composition.

One of my favourite pieces off the album was the gentle but quite beautiful The Fortress. The final song off the album and one that has a slight Celtic lilt to its overall mood, the percussion explodes into action and we are marched across the country side to the safety of our fortress. I adored the interplay here between the soft elements of the track and the more powerful movements within; this created a very classy juxtaposition to enjoy, and thus manifesting simply the perfect ending composition for the album.

Posted by Steve Sheppard at 4:06 AM