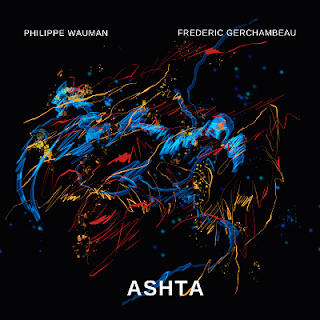 I have been following the musical pathways of Philippe Wauman in another guise for some years now, but here he partners with fellow electronic musician Frédéric Gerchambeau and thus produce between them one of the most fascinating EM journeys I have taken this year so far, with this new release entitled Ashta.

Here is Ashta, its meaning is eight in Sanskrit, and here this sojourn can be taken by crossing eight valleys, each associated with eight Crystals or stones. This is indeed a riveting subject, and I Indulged a couple of listens before beginning to write my thoughts, as the first time around I became so encapsulated by the subject matter and performances within, that I lost myself. This interests me deeply also, as a composer of ambient music myself, and one who has an interests in the properties of Crystals.

The trail starts with the gentle and ever onward The Amethyst Valley and then morphs into a far more intent offering entitled The Citrine Valley, both pieces highlight a truly addictive journey and the styles of performances although different, accompany each other perfectly.

Our sea is the colour of this next track, The Lapis-Lazuli Valley and the stereo experience on my new headphones was blissful, this track again differed, with a few Jazz styled ethics; various amalgamated percussion could also be found within, and reminded me at times of another EM outfit in Sensitive Chaos (Jim Coombs).

The tracks flow with such precision and crafted care and attention, that it is utterly a pleasure to be a part of this musical experience. One of the finest examples of that for would be the piece The Topaz Valley, an arrangement that seemed to swirl around me in an almost excitable energy and allowed me to drift into the concluding offering entitled The Journey Is The Destination, a piece with a powerful percussive essence, backed by some truly intent and intense synths, something about this reminded me slightly of turn of the century Al Gromer Khan, but heavier in construction and more complex in build and progression, but none the less a brilliant way to leave the album.

Ashta by Philippe Wauman & Frédéric Gerchambeau is an art form all of its own, it is a wonderfully symbiotic amalgamation of electronic music styles, one that to be honest I enjoyed immensely. Each track is tale to be told on its own, and it is the perfect release for the listener who loves a musical adventure, taking ones as it goes, as the journey through Ashta is fascinating, intriguing and enlightening.

Posted by Steve Sheppard at 6:39 AM