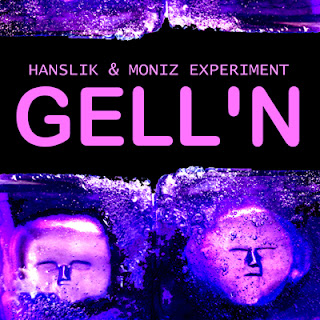 I would have to say Gell’n by Hanslik & Moniz Experiment has to be the most unique and fascinating album in the electronic field I have heard this year. The long-time collaboration of Alan Hanslik (Synths/keyboards) and Steve Moniz (Guitar) have really pushed the boat out of dock for this latest experiment entitled Gell’n, and in my view it works brilliantly.

The opener is a sublime beginning and one of my favourite pieces off the album. Time progresses onwards, it is an unrelenting offering that steadily moves around the face of its own musical clock, with the combination of electric guitar and keyboards.

However my personal favourite would be up next and called Traveling Ministry, the floating electric piano sounds and synths are utterly wonderful, and then add to that a crafted guitar by Steve Moniz; this just created for me something I hadn’t heard the like of since Rainbow Dome Music by the great Steve Hillage.

Clock Works is a superb creation of creative and artistic minimalism, mixed with electronic segments to manifest what could be a whole new genre entirely; here is a fine example of experimental music working in complete harmony with the creators, there is a delicious random energy that could be assumed here, but it is a clever one, and both artists weave in and out of each other’s flows with consummate ease.

Two more intriguing pieces follow with the almost electronic classical crossover energies of Gooey, and then the more traditional title offering of Gell'n, which has a touch of Berlin School built into the weave of the construction of the arrangement. We then conclude the project with Interference, a fine piece to end with, and one that also happens to be the longest composition off the album at well over 10 minutes, there is a certain lightness and sublime flow to this concluding long form arrangement, that continues to build change and morph towards the conclusion of the offering.

Gell'n by Hanslik & Moniz Experiment is without doubt the best work from the artists thus far; its fresh and dynamic approach should be appreciated by lovers of both electronic, and experimental minimalistic music. The performances by both Hanslik and Moniz are spot on, full of flavour and with no fear at all of trying something new at all, one has also to add that this is a very addictive album, once you’ve popped Gell’n you won’t be able to stop playing.

Posted by Steve Sheppard at 3:02 AM