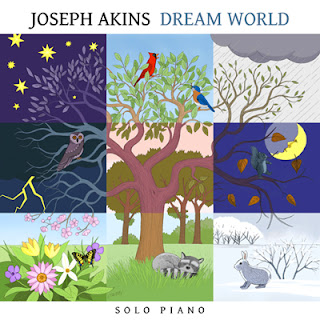 I have been following the work of Pianist Joseph Akins for some 8 years now, since we were standing Under a Southern Sun. Here Akins has produced someone of his finest work ever, and dare I say it, probably one of the best emotive solo piano albums I have heard this year, with the outstanding Dream World.

The title track, Dream World kicks things off and is a wonderfully dramatic and deep offering that really ticks all the boxes; personally I adore the depth it goes to, the floating notes seem to drift from one realm to another, and the negative chord structures and deeper keys are simply a creative back drop of an almost mysterious movie scene, in what has to be one of the most crafted beginnings to an album I have ever heard from the artist.

Another favourite that really deserves a big mention is the following track Peacefulness, a calming reverie can be found here, but more than that, I simply delighted in the ambience it created, a soft Sunday morning refrain, and a melodic memory palace of a number.

Dream World is an 11 track compilation of some of the most mature solo piano I have heard for quite some time, this aged and wisdom filled energy can also be found in pieces like Who Am I?, another thoughtful moment on the piano, when you can almost hear the music raise the question of the title given, or the minor heaven of Melancholy, a song that almost cries on your shoulder whilst your listen.

Then there is the mood filled Night Storm, this is performed quite brilliantly, painting a wonderful juxtaposition, especially on the word storm, which could indeed have many alternative reasons behind its creation, a truly clever piece indeed.

Dream World by Joseph Akins is with ease the artist’s best work so far, he has allowed himself to dive into a whole dimensional of emotional structures, and the result is the creation of Dream World, which in my view also has to be the most creative and mature solo piano album I have listened to for many years. This is a release I would recommend to anyone who likes good music, it’s played with a sensitivity that is touching, and also maybe illustrates our own path and journeys as well.

Posted by Steve Sheppard at 1:58 AM