Threshold Of The Universe By Jim Ottaway 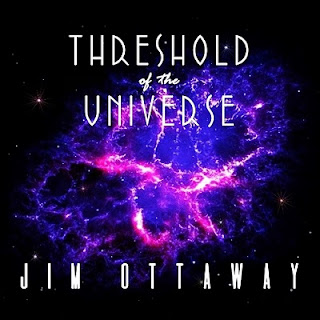 Threshold Of The Universe

I have been following the works and musical career of Australia’s Jim Ottaway for some 13 years now, in fact the Orion album is where I first dipped my toes into his musical galaxy. Now I produce and present my own space music show called Lagoon Of Eternity on One World Music Radio, so reviewing this album, Threshold of the Universe is akin to leaving a child alone in a sweet shop.

This galactically spirited journey starts with the opening piece Beyond Space And Time, the intent is set here and the deep excitement of an uncharted territory can be felt deep within the progression of the music, beautifully performed by Ottaway and setting the scene wonderfully.

The somewhat apprehensive tones of this next piece once again gift us a musical insight to our location, it is called Starburst In Celestial Darkness. Here we have a classical EM styled offering of well over seven minutes that is truly crafted, the high tones represent for me the starbursts within the dark void of space.

As we move further along on our journey we come to a track that has it all called Infinite Space. Ottaway has impressively built a tempered sense of drama into the weave of the album as a whole, but more so in this powerful and vast opus. I’d guess it would be like opening your crafts view screen and the very magnificence suddenly hits you.

This one seems to be a popular offering with some that I know, and I can see why, Celestial Parallax is a blissfully fluent and an incredibly smooth arrangement of truly very good electronic space music, the gentle build and anticipation on this offering is really breath taking, one can feel the swirl, movement and change of the position that is built within the track splendidly.

One of my personal favourites would be this one; there was a mood about this piece that hooked me in and never let me go. Alien Star floats in the distance, the incredible slow build here gives a feeling of approaching this giant giver of life, the sounds and electronics within the piece emphasise that even more. This is one of the most intricate offerings on the album, and I love it.

The softness of this next track was another total winner for me; it’s entitled Parallel Suns and is one of the most ambient arrangements off the album with ease. The keyboards and synths here create something so very reassuring and warm to listen to. There is a crafted deeper bass segment that is layered perfectly toward the mid and latter segments of the composition, which adds another layer of class to the piece.

I have recently selected this very track to be a part of my stations playlist on my space show, for me it gave the listener a perfect representation of space music and Ottaway’s total overall project, and at well over 9 minutes the longest track off the album. Two Trillion Galaxies has everything, a vast opus of sound, a sense of drama and anticipation, and all the while painting a musical backdrop with such a skill and musical dexterity; at times whilst listening to this offering I was reminded of the works of one of the masters of electronic music in Vangelis, yes, it is that good.

The penultimate offering off the album is called Dark Matter In Distorted Starlight, it contains a magnificent harmonic resonance and it is as if space itself has manifested a choir of its own. The electronic sounds and effects give us the distortion of starlight, but the powerful nature of the artists synths truly reign supreme in what is a stunning arrangement of really excellent vast space music.

I respect the artist’s decision to leave the title track to last, this is the main inspiration to the whole idea and it really does sum the whole project up beautifully.  Threshold Of The Universe is a grand melodic composition that has that touch of magic about it, and that will make it timeless as years go by, it could be a piece that may well become a seminal body of work for Ottaway too. It is without doubt the best way possible to leave the album, and in some ways, its warmth reminds me of Eno’s Always Returning.

Threshold of the Universe by Jim Ottaway is the artist playing from his heart to yours, this vast body of work will be adored by all who love electronic and space styled music, but I believe also by those who appreciate a hard working musician that bears his soul to you. Threshold of the Universe by Jim Ottaway is one of those albums I would recommend any day of the week, it will transport you to a place where you don’t need to think, just be.

Posted by Steve Sheppard at 3:58 AM