The Wind Within By Peddlers of Joy 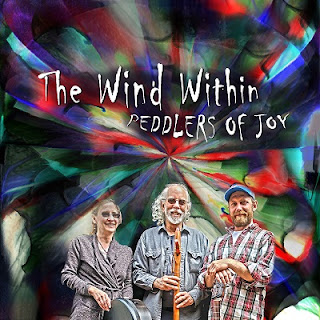 The Tank Centre for Sonic Arts in Colorado is the location of this brand new spontaneous album of quality, multi-instrumental music named The Wind Within, and performed by Peddlers Of Joy. I have never been to this location, but the music projects recorded at it are some of the most inventive, artistic and connected I have heard.

Here Peddlers of Joy manifest seven heartfelt opuses of serenity, with flute, light percussion, acoustic guitar, vocals and a veritable myriad of other instrumentations, for example track one called Crossing of Paths, has a blissful ambient vibe to its overall musical narrative, the piece moves slowly and carefully, akin to a stranger walking through a misty forest at night, the appeal of this meditative offering is strong and very enjoyable.

Above is our next track, chimes greet our arrival and a gentle almost distant flute draws us in further, the build by Friedman on flute is fantastic, and one that creates a feeling of a wondrous energy moving toward and away all at the same time. The harmonic value of this track alone must not be underestimated. The best part of creating long form music is that you have the opportunity to create art within art, introduce the listener to many facets of your project, and that has been done exceptionally well here by Peddlers of Joy.

Part one of four suites is now up, the first is entitled Four Directions Suite: Black, this honours some of the sacred teachings and traditions of indigenous peoples, and done in such a way that it brings a sense of harmony peace and tranquillity in alignment with the mystical narrative, the distant vocalisations of Freyja Wild are simply idyllic and thoroughly mesmeric, whilst the chimes and slow hovering build are ambience personified, timeless music indeed.

Four Directions Suite: Red is our next portal to peace, long form magic is created here by the Peddlers of Joy, I sat back and enjoyed its reveries for 17 minutes plus, and the addition of Friedman’s harmonica was not only a stroke of genius, it was also incredibly inventive and artistic, the use of it manifested a slightly sharper edge to the arrangement, one which coalesced sublimely with the compositional structure of this improvised offering.

We point now to Four Directions Suite: Yellow, this contemplative arrangement is slightly deeper in its initial tones, the guitar here is brilliant and reminds me of old style Pink Floyd, with that shadowy vibrational energy, Wilds ethereal vocalisations seemingly drift around, akin to a mist on an early summer morning in June, the Tank must manifest that all-encompassing brooding musical reality, where all music is everywhere.

The penultimate piece off the album is also the shortest at just over 11 minutes long, there is a nice rhythmic essence to this offering that I thought played out well within this magical realm of the Tank and called Four Directions Suite: White. The whole piece was pristinely manifested and the chimes started a slow movement to an offering that built a fair depth and profundity to its narrative; this was with ease the most intense track off the album.

So we now conclude with the last offering entitled Within, this is also the longest composition from the album at well over 20 minutes long, here the group explore the distance, and the complexities of their location with a truly incredible arrangement. Vocalisations hovered like a distant storm, and chimes and tones drifted like smoke from an extinguished candle, this is one of those tracks that it would be very easy to get lost within, and while you’re doing so, time actually does becomes irrelevant.

The Wind Within by Peddlers of Joy is a new release that you would be wise to check out, it has seven simply harmonic and meditative long-form compositions of a multi-instrumental nature, it has the energy of a location that is fast becoming a hot spot for the more new age styled artists, and those that wish to float within their own creations; as such this is an absorbing new album that must not be missed at all costs, if you like long form ambient music, then you would do well by checking out The Wind Within by Peddlers of Joy.

Posted by Steve Sheppard at 6:42 AM