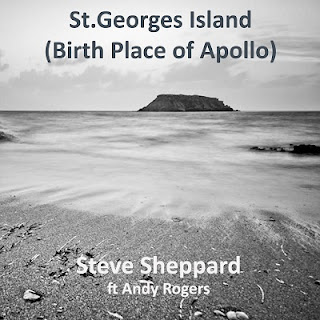 I must admit the latest release from Steve Sheppard, his single St.Georges Island (Birth Place of Apollo) is one that I totally adore, now I know the story behind the music, it is a piece he composed about a location not too far from our home, a little island surrounded in history that is still a mystery to most people, a place that is according to legend, the birthplace of Apollo.

The use of natural sounds that are used so well throughout the arrangement are used to perfection, even the sound of the boats engine taking you the island are timed perfectly, and in some ways reminds me of Mike Wall and his album A Time for Healing.

The build and progression are just idyllic, they take you on that journey with him to that very location, where you too can explore the mystery behind the island, and the sounds of the children laughing also add so much to the arrangement.

I must also give a mention to Andy Rogers, who added some additional keyboards to the piece, they were just right, and did not distract from the original composition.

St.Georges Island (Birth Place of Apollo) I am sure this will be a huge hit for Steve Sheppard, and even maybe an award winning piece too, as it will be loved by all who adore good music that tells a story.

Posted by Steve Sheppard at 6:59 AM