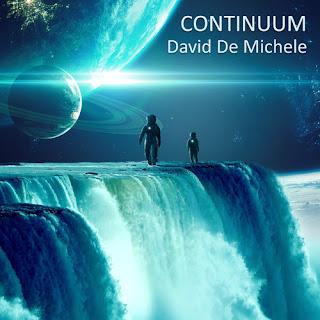 David De Michelle is a musician who has been on his musical path for some time, I remember the works Through Indigo Eyes from 2003, and Passage Through the Central Sun from 2004, skip forward some 18 years and we have an album that is probably the most stunning of them all in, Continuum.

This flavourful journey of space time and synths, starts with the single and title track Continuum, this has to be one of the most beautiful compositions ever penned by the artist, its moving descriptive elements all coalesce with the repeating keyboard motif to bring us, a track that is simply beyond all that we can imagine, and transports us through the Continuum itself, to worlds, galaxies and solar systems that are utterly breath taking: listening to this track, you may be minded to think of Jonn Serrie meets Mike Oldfield.

We can imagine our musical starship speeds past an asteroid belt, those near to the craft seem to speed by, those faraway seem to just drift on the wings of time themselves, thus Parallax. De Michele creates here a clever crafted piece that seems to float within itself, and has classic New Age elements built within too; one must also applaud the use of vocalisations, as it brings a sense of heavenly harmony to the overall proceedings.

Inner Space is a mysterious semblance of ambience, a light percussive beat lays deep within, one that creates a sense of movement, but it doesn’t overwhelm the sincerity of the track, the soft pads and chords raise and lower the mood of the piece, it’s like listening to an ocean tide flow in and drift out, and as such, utterly idyllic indeed.

One of my favourite and emotionally charged subjects is the quality of light, which is why I adore the season of autumn, on Luminosity we have a composition that radiates a pureness of a textured brightness, one that flows back and forth like waves on a galactic ocean, the percussion remains steady and within the backdrop of the arrangement, whilst the magical synths of De Michele manifest an almost regal sense of awareness at times.

Rising up from the pillars of creation comes this next offering entitled Ascension, here we have another deeply moving opus, but one that contains a drifting sense of ambience within its realm. Each track, one after another, seems to flow with a natural beauty that is so welcome; this dream like piece is a fine example of the artist’s honest and heartfelt pursuit of perfection.

A distant star explodes; raining billions of years of space dust across the universe, here on Supernova, David De Michele manifests something utterly special, deeply emotive and extremely powerful, with the panache of Kevin Kendle, the fluidity of Jarre and the grandness of Vangelis, this is a masterful work of art from the musician.

We can now move toward uniformity, to that union within life itself as we mix completely with the universal energies of this next track entitled Convergence.  The chords from the artist are stunning, drawing us in with such a powerful grace, through the percussion we continue that constant onward movement, the synths are almost imploring in nature here, this is a splendid penultimate offering indeed.

It is time for our musical craft to follow a specific flight path and on the last offering from the album called Trajectory we can do just that. Note the gentleness of the offering, it is like were looking over our shoulder at the journey taken, and through the keyboards and synths we are now focusing on this last part of our voyage of plenty, our return home, a wonderfully narrated track from one of the best space music artists in the business, a classy way indeed to conclude the album.

Continuum by David De Michele is without doubt a work of art, its right up there with the classics of this genre; it is an album that once play is pressed, it’s simply impossible to stop listening until the final brush stroke of genius.

Continuum by David De Michele will be a much sought after album for all space music enthusiasts, but surely one that will see some recognition in the shape of an award nomination at some stage, electronically majestic and an absolute winner with ease.

Posted by Steve Sheppard at 1:38 AM