Isle of Shadows By Christopher Boscole 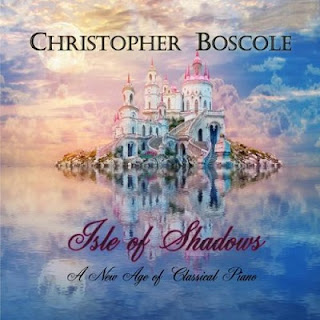 I have been following the pathway musically of pianist Christopher Boscole for some 10 years now, from Floating On a Melody to Dawn Of Love and now into the most welcome arms of this current voyage through piano entitled, Isle Of Shadows, featuring music from the classical genre, some that are known well and some lesser explored narratives.

The familiar tones of Chopin flow from the keys of Boscole on the tracks Nocturne Op. 9 No. 2 in Eb Major and 24 Preludes Op. 28 No. 17 in Ab Major, the former containing a wonderfully emotive performance, and the latter a presentation that is as fluent as a spring mountain stream.

One of my personal favourites is featured on this illustrious release in Pathetique Sonata No.8 Op. 13II. Adagio Cantabile originally by Ludwig van Beethoven. Here Boscole creates a sublime performance that captures the essence of the master, and that imploring sense of drama and passion, Beethoven is also represented twice, the other presentation probably one of the best known of all times in Moonlight Sonata No. 14 Op. 272I. Adagio sostenuto, one has to say that Boscole’s rendition is a brilliantly deep execution of the original, and one I could listen to many times over.

As previously stated some lesser known works are also represented here, and one I simply adored was the title track itself Isle of Shadows 6 Lyric Pieces Op. 28II. Skuggornas o by Selim Palmgren, a fine exhibition, one that I felt created a whole raft of ambience, and among the many great choices; there was even time for the artist to showcase a new track himself, with the piece Until We Meet Again. This was a sumptuous way to conclude the album, and one that had an almost cinematic energy about its construction as well.

Isle of Shadows by Christopher Boscole is a 12 track album of class and elegance, a release of masterful performances, and an offering of passionate performances that remind us of some of the all-time classics, and shine a much needed light of quality on those lesser known ones as well. There can be no doubt that Christopher Boscole is an elegant pianist and a crafted composer, and here on Isle of Shadows, there can be found 12 performances that raise the artists stock tenfold.

Posted by Steve Sheppard at 8:04 AM