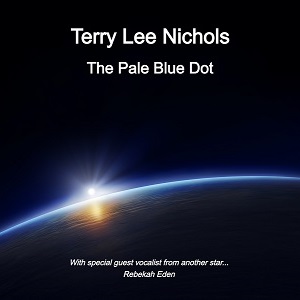 Two years previous I was literally blown away by the Terry Lee Nichols album We Have Only Come To Dream... I rated it as one of the best albums I had heard in that year, I am once more at that very point with this absolutely breath-taking new album by the artist entitled The Pale Blue Dot, an album that plots the transition of our home from its beginnings and the journey thus far.

The artist in creating this his own miracle in music, has once again manifested something beyond brilliant, a colourful and picturesque start on In the Beginning... (Quantum Fluctuations) and a virtual cinematic explosive masterpiece entitled First Stars; Terry Lee Nichols through this track alone proves himself to be a master painter with sound and tone.

For the listener there is so much to enjoy and to dive deep within, perhaps it could be the utter ambience and vocalise of Stardust (Clouds of Gas and Dust) featuring the talents of Rebekah Eden, or it could be a sojourn with the piano based symphonic gestures of East of Eden, a track that contains one of the most fluent performances you are ever likely to hear, or maybe one could simply give into the simplicities of the track Child's Play.

Terry Lee Nichols is one of those composers who can literally reach into your chest and touch your beating heart. The ending track says it all as we revisit in a fashion, a composition on a former album with the piece The Pale Blue Dot - Train to Dachau Redux. This one made me feel deeply reflective, for we live on such a beautiful planet, but all we see is fear and what we fear we never truly see. A beautifully poignant end to what is an album that deserves all the plaudits it gets, listen specifically to the spoken word in this incredible composition.

The Pale Blue Dot by Terry Lee Nichols is probably going to be one of my top five albums for 2020; it is a quality release of natural beauty, and a sublime presentation from a musician who clearly wears his heart on his musical sleeve. The album is one of those rare collections of musical perfections; it is a release that speaks to the population of the planet, and without doubt must be regarded as the apex of what is called the contemporary instrumental genre, it really doesn’t get any better than this.