Across the Evening By Jon Durant & Robert Jürjendal 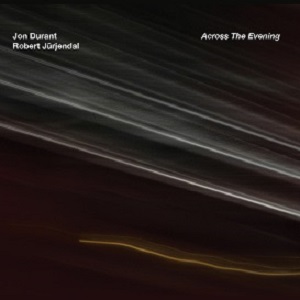 There is something truly ambient and all-embracing about this latest release by Jon Durant & Robert Jürjendal entitled Across the Evening. This is without doubt a fine example of contemporary instrumental music and how to create a pastiche of colour through tone and sound.

We push away from the docks with the quite brilliant opener entitled Early Evening Colors, one of many personal favourites for me this one; the repeating motif throughout the piece was beautifully layered, and the textured guitar work utterly transcendent.

There are several moments on this release I like to call sublime genius, the next two compositions in particular are fine examples, and the first is called Distance Groove. The elevated tempo and crafted performances on guitars by the duo were simply delightful to drift upon, and then to literally float into an ocean of musical bliss with the track Reflective Sea, this was akin to touching the very clouds of heaven themselves, we must also tip the hat of appreciation in the direction of Aleksei Saks on Trumpet, an instrument badly underused within this genre, and I have not heard something so good since Kevin Kendle employed its use on his winter album back in 2006.

Mirage started with an exciting percussive beat, and that Middle Eastern flavour excelled further across this musical desert with a crafted electric guitar presentation by Robert Jürjendal. There was a harmonic resonance about this composition that created a wonderfully addictive energy to the arrangement.

As we tip-toe into the second half of the album we come across another charming musical narrative that contained layers of both ambience and colour, a nod of appreciation goes to Colin Edwin for some delicate but purposeful fretless bass on this offering, a track that almost had a sense of late 60’s early 70’s rock about its overall construction too.

There was a lightness of presence about this next track entitled Beguiling Eyes. For me there was a distinct familiarity also with a previous opus entitled Mirage, and a top class performance by all can be found here on this rhythmic arrangement especially Andi Pupato, whose percussive genius at times took me back to the great days of Hossam Ramzy.

As we now drift smoothing into the deeper rivers of this album, we come across a truly beautiful creation called On the Water. The guitar work on this offering was exceptional and manifested for me a vast wonderland of ambience to musically sail upon, this would also become another personal favourite of mine, I must own up to having listened to this one several times, as I seemed to just hover away with the sublime tones each time I did so; this I believe could be tagged as utterly majestic.

Return to Russia is the longest track off the album and one may also add performed live for the release. The Trumpet of Saks returns and manifests such a heartfelt mournful repose, it is hard to not be moved by its transcendent beauty, mix that with the caring and crafted performances on guitar by Durant and Jürjendal, and I believe you have here, an offering that sums up the entire project, and a composition that literally rivets you to the spot and demands your full attention; this is contemporary instrumental music at its very best.

The last track off the album is the only one that we see the use of vocals being used, and they come courtesy of the talented Inna Kovtun on the track Balkan Blue. There was a sense of a slight folk ethic within this creation that made it even more compelling, and a clever way indeed to leave what has been a truly fascinating album to have journeyed with.

Across the Evening by Jon Durant & Robert Jürjendal is a reminder to all that the genre of contemporary instrumental music is alive and well, the performances on the album are all beautifully crafted, wonderfully produced and sublimely performed, the narrative is strong and consistent and takes the listener on a musical journey of great class and professionalism, this of course makes it so easy for me to completely recommend this offering to you all.

Posted by Steve Sheppard at 4:23 AM