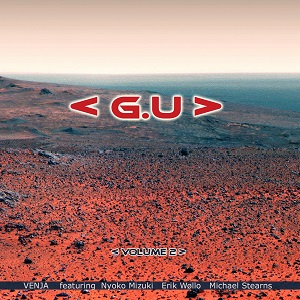 This brand new almost dystopic album from VENJA, ft Michael Stearns, Erik Wøllo and Nyoko Mizuki is a graphic work of art that pulls the listener into an almost cinematic styled opus and never lets them go.

The opening offering entitled Out Of Control and the following piece Darkness (featuring Michael Stearns) sets the scene perfectly, the keyboards and synths give us a backdrop of an utterly hopeless situation, the use of spoken word was a sublime idea and added even more weight to what is a truly crafted album.

The soft and mysterious elements in tracks like The Stars Are Better Off Without Us, morph into a dark and harsh reality of musical tone, one that is extremely poignant, mix that with the mechanical dimensions of the offering Glitched  and you have a dark mood filled panorama.

This 13 track release is one of the most addictive albums I have listened to for months, compositions like the outstanding Event Horizon, with its dualistic electronic intent, almost took me back to the days of Tomita, and the full flowing and inspiring arrangement Awe, manifested a reality for me of hope in the grand structure and mechanics of the universe perhaps, and were my personal two favourite tracks from the album.

Galactic Underground Volume 2 by VENJA, ft Michael Stearns, Erik Wøllo and Nyoko Mizuki is a true work of art in motion, a descriptive musical narrative that holds the listener rigid with anticipation from the first note to the last utterance of the album, a crafted work of electronic genius by all the artists concerned, and a release that absolutely deserves to have its socks played off on radio, an easy album to recommend indeed.

Posted by Steve Sheppard at 6:07 AM