In This Moment By Laura Christie Wall 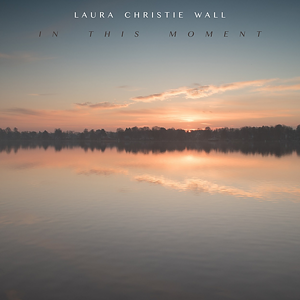 I listened intently to this album in its entirety several times before even thinking about creating a review for it, I felt indeed of some calm, some solitude and inner peace, this world is a little crazy right now, but thankfully due to the performance by Laura Christie Wall on this beautiful album entitled In This Moment I found all three desires.

I try each and every day to keep in the moment, after all, it is all we will ever have and this album was a testament to that bliss that I like to call a halcyon occurrence. Each piece on this release is utterly blissful and creates a space within the minds eye, to ease back and reflect in a calmness of serenity. The first track on this eight part offering is the shortest of them all and called Do You Remember, a perfect opening portal to a world of lush and smooth solo piano.

There is a vast depth about this next offering that is so appealing and well suited for the state of the planet now. Going Under has a sense of reflection about its energies that will touch your mood and emotions, but there is also a delicate essence of hope built into the weave as well, something we all need.

Then with a flip of a musical coin we are gifted a pristine composition called Euphoria (Piano Solo). This version stands out as one of the most emotional offerings off the album, played with such a precise delicacy it is blissful to just listen to over and again and still be lifted. The melody is upbeat and offers much to allow the senses to become euphoric about its overall construction.

At the half way juncture we come across another favourite of mine and this is called You Win. Whether this is a statement of resignation or one of saluting a victory of another is up to you to call, the fluent piano here will bring a certain feeling of serenity, and a well meant energy of surrender to the musical soul that all will enjoy; the use of pause here also has to be applauded, it has been executed brilliantly on this track.

We now move into the latter half of the release and as we do so we come across this charming musical narrative called Beautiful You. The artist’s piano here is like a truth machine, you know the moment when your loved one looks into your eyes and says you are so beautiful, and you know they actually mean it. The elevation in tempo and energy near the middle of the piece gives a moment of delightful interplay, one that was so beautiful to enjoy.

The clock ticks away and somewhere between that tick and tock, the night crawls into this dimension of sleep and restful ambience, and dreams begin to grow, usually for me at Quarter Past Midnight, which just happens to be the title of this very composition. This is one fine performance of solo piano, one that depicts this time of day to perfection, one that also illustrates just what a colourful pianist the artist is, and this ability to paint with sound manifested for me here, one of the best offerings off this release with ease, a track I could listen to for an eternity.

As we reach the penultimate track off the album we find we are gifted another moment of reflection through the composition Someday. This is a wonderful memory kissed offering that has a creative change of tempo and intensity built within its own weave, listen also to the blissful fluent performance here too, it is gorgeous.

So we have reached the very last doorway to the album and it is called Found. I always find a concluding track of an album could be a powerful roundup of all that has gone before, or one that gives hope perhaps, or in the case of this album and this track, one of the most serene and contemplative ways to leave what has been a truly wonderful journey of solo piano.

In This Moment by Laura Christie Wall was indeed the panacea I needed today, the tone of the album brought back my balance and each and every composition allowed a sense of musical clarity to grow within my day. Here is an album that you just have to bring into your musical realms, solo piano never sounded so good, so crafted and masterfully creative, and this is an album that with ease, will fill your world with much needed peace and tranquillity that we all need right now.

Posted by Steve Sheppard at 4:48 AM