The Learning Tree By Mike Ian 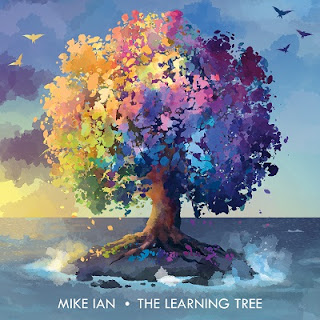 Mike Ian has been on my musical radar for some years now and ever since his acoustic works in 2015 and I have thoroughly enjoyed each and every second I have spent in the company of his music, on this brand new offering entitled The Learning Tree, we’re about to go on a journey of musical exploration and much more, so let’s set sail on a sea of tone and delight with the artist.

The opening foray is utterly splendid, a little tabla lights our way into a progressive rock styled opus; the string sections added a wonderful layer of depth, but A Pirates’ Dream literally bursts into action at just under the two minute marker, in a track I rate to be the best creation thus far by the artist and his vocals doubly so, simply put this is one of the best opening tracks you could ever wish for to start an album.

Our journey is long and eventful, and as such, by the time we cast eyes on the shore of this next offering we are truly blown away with its brilliance. Happily Ever After starts with a wonderfully Celtic feel; the pipes were a bliss filled addition, one that drifted into the artists classy vocals on an anthem like composition; Mike Ian has pulled out all the stops here, on an album that will reign supreme in the eyes of the music aficionado, I must also add with regard to this specific song, listen to the very end as well.

Cast In Stone has a delicious New Age beginning with some floaty keyboards and then Ian’s acoustic nature kicks in, with a folk styled vocal that then manifests into something that John Young formally of Greenslade, Asia and now of course Lifesigns would be proud of; this has to be one of my personal favourites from the album. I have been fortunate enough in my life to have heard so much good music, but the vocal structures, combinations of harmonies, and minor major chords on guitar, make this one of the best rock styled pieces I have heard for many years.

However this journey of perfection continues with another classic entitled Hereafter, the gentle beginning was sublime, partnered with the soothing narrative this incredible song with its Beatles like ethic would morph into a song that Neil Finn of Crowded House would have been proud, and another anthemic master piece from Ian.

At the half way marker we come across a song entitled Next Stop Anywhere, a ticking of a timeless clock edges us into the offering, a chilled breath, a strum and then, a moment of acoustic magic to enjoy. This is Ian treading on home turf and adding a resonating rock vibe into the proceedings; a song that powers the listener along on a bed of such beautifully produced and arranged musical magic, and then adding that tearing guitar riff at around 3:15 was a moment of utter genius.

I could go on about this album for days; this is a style that I have loved for more years than I dare mention, so by the time we get to another master piece entitled Saved I am in rapture. The engine room of bass and percussion here really elevated the energy of this track, and the overlaid supporting and backing vocals added to some of the most crafted guitar performances I have heard for simply years, could I be listening to a hit single here?

The acoustic flavours of Letter To Home actually hit me emotionally, the content and song writing reflected partly my story, however in my case, time ran out of my home town, and I had nothing left to return to or for. However this grand and empowering rock anthem really resonated with me, the minor major effect was in full flow here, so was the rasping guitar adding so much determination and grit into the composition.

The penultimate offering of the album starts with a careful piano, and we’re underway within the dimensional reality of Something More Nothing Less. If any budding musicians wanted to understand the concept of build and progression of a track, then they need to look no further than this wondrous piece, one that at times reminded me of Mike and the Mechanics mixed with The Jellyfish, and that cannot be a bad thing.

We now see our safe harbour approaching on the horizon and as such the artist has one final song to gift us before we part ways, it also just happens to be the longest arrangement off the album at just under seven and half minutes long, and contains sounds of the ocean and a bell to signify our arrival at this last and most dramatic of offerings.

Shine On has to be one of the best conclusions to an album that I have heard for ages and a piece that would be the perfect final track at a concert with its anthem like vibrations. I recommending listening to this track multiple times, once for the sublime song writing, once for the outstanding musical production and performance, and then thousands of times over for the combination of an experience you will simply never forget.

The Learning Tree by Mike Ian is with ease the best album produced by the artist, it is one that has made its way onto my playlist of timeless choice, and it is one of the finest works in the rock and progressive rock genres I have heard for at least the last 5 years, this album is that good, is it totally unforgettable, and my advice to all those thinking about purchasing this album is, don’t think, buy it now, your senses will love you forever.

Posted by Steve Sheppard at 6:48 AM