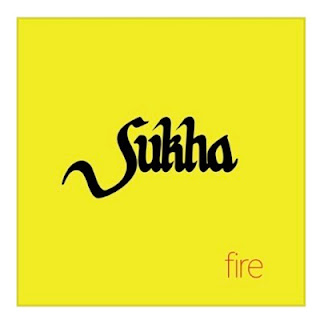 The vibrational energies of this new album by Sukha are quite special and manifest a feeling of oneness and completion, and all within an uplifting nature of tranquillity and peace, so let’s introduce to you the two parts of the whole who make this mantra band so appealing, Nicole Fagone (Sukhmani), she utilises a sweet and tranquil talent that brings forth some of the most serene, yet heart felt vocals and Steven Fagone (Sukhman), who adds to the vocal structures of the release and creates some of the most tender tones on acoustic guitar I have had the pleasure to listen to for some time.

The expansion of mantra music has really taken hold recently; we are seeing a resurgence in this genre, one that reminds me of the early part of this century through artists like Deva Premal. This of course can only be a good thing, and with the opener we are gifted Om Bhavam Namah, this is one of the most ambient, yet utterly transcendent places with which to start our spiritual journey, the addition of Jared May’s Synthesiser was a stroke of genius, and added much to the already smooth and flowing composition.

The vibe of this next piece offered up a fascinating arrangement, a folk styled ethic can be heard here and the acoustic work of Sukhman, which is a key component to this manifestation of tone. This is an expressive and an impressive mantra, one entitled Om Vardhanam Namah. The elevation in tempo added a layer of energy into this piece that makes it totally accessible to everyone.

I still to this day adore the use of natural sounds on compositions, I do it myself from time to time on my creations, and a charming sense of nature is created by the bird sounds that open the piece Om Kriyam Namah. The symbiotic partnership of both Sukhman and Sukhmani truly became very evident here on this track, also notable mentions must be given again to May for his use of synths in this offering, and the quite rhythmic palate brought into existence by percussionist and drummer Tripp Dudley.

The longest mantra off the album, at well over 11 minutes in duration, is one of my personal favourites and entitled Om Daksham Namah. The guitar here is sublime in all its aspects, it manifests a wonderful mood between major and minor, and brings a further state of bliss when combined with the sensitive yet flowing vocals of Sukhmani, one must also add a big thumbs up for the addition of the flute on this track, a tip of the hat to Amar Khalsa for that.

As we move into the deeper waters of the release now and come across a truly friendly offering entitled Om Ritam Namah, there was and is something about this mantra that is so warm and all-encompassing to listen to, the symbiosis between percussion and guitar worked magically here, and at times it even manifested an organic energy into the proceedings.

The penultimate offering before us is the mantra Om Anandham Namah. This would also gift us a fast based and folk driven moment of musical majesty to enjoy. The multi-instrumentational nature of this piece gave it a multi-dimensional manifestation, one that contained an imploring and passionate vocal performance from Sukhmani and one that drove the composition home with much intent and purpose.

Our last mantra is Om Varunam Namah, and as it would happen this would be another personal favourite of mine, I would have this resonating in my head for most of the day onwards. For me the combination of all the artists involved here worked beautifully, and the mantra itself I found so very uplifting and fluent, and without doubt the perfect piece with which to end the release with.

Fire by Sukha, it has to be said, was one of the most enjoyable experiences I have had for a while, the musicianship within this album alone is sublime, and given the added talents of the two artists headlining the project, you the listener are onto an absolute winner here regardless of if you are into the mantra styled music that is created here or not, for here is a release that is picturesque, calming, uplifting and empowering, and totally accessible to all who have an open mind enough to listen.

Posted by Steve Sheppard at 5:20 AM