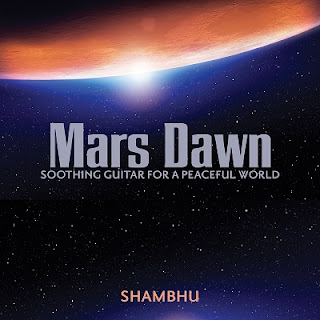 I watched along with millions of others as the Mars rover began its voyage and eventual sojourn on the red planet, and having always been one who has wondered about the mysterious nature and realities of space throughout his life time, I felt the thrill of excitement vicariously through the journey on our screens.

Here guitarist Shambhu manifests that first morning on this new world for your delight, within the medium of his latest single Mars Dawn.  His guitar is a brush stroke of pure genius; rarely in this acoustic field will you find a performer with as much soul and connectivity as Shambhu.

This delightful offering is added to by a blissful cinematic and symphonic back drop of sound by Nathaniel Wolkstein and an outstanding performance on EWI/French Horn by non-other than Premik Russell Tubbs, whose joint efforts would reveal at its conclusion, one of the most impressive, artistic, and serene pieces of instrumental music of this year thus far with ease.

Posted by Steve Sheppard at 8:23 AM