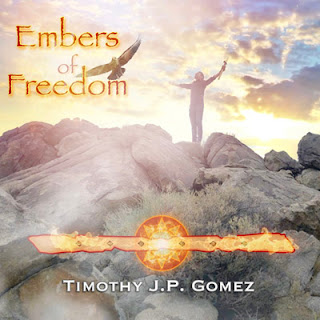 Timothy J.P Gomez has been a musician of interest to me ever since the release of his album The Awakening way back in 2014, and since then I have eagerly awaited a new album release with absolute pleasure, however that wait is now over with the release of the artists new collection of songs entitled, Embers Of Freedom.

The magical art of creating great flute music backed by quality added instrumentation is a crafted exercise, but one done quite brilliantly by the artist, and on the opener we have a fine example of a symbiotic performance, one perfectly balanced by Timothy J.P. Gomez on Call of The Wind; the artist manifests an almost light rocky element with acoustic guitar and pertinent percussion, to gift us the perfect start to this new album.

We have all been touched, some of us literally by the pandemic, it certainly brought a huge artistic change in my life amongst many other aspects, and here on Embers Of Freedom we see another project birthed from the despairing and confusing times of 2020. On Dawns Deliverance we see another aspect of those days; the flute is imploring and almost crying out for guidance, whilst the guitar manifests some delicious minor chords to add colour to the moment.

Now we arrive at one of my personal favourites of the album with the track Rite of Passage, the tabla and percussive efforts added a wonderful flavour to the piece, but the guitar was magical in setting the initial scene, and almost reminded me of the opening chords to Nothing Else Matters by Metallica, which I know is perhaps a little bizarre, but the song itself, and the flute performance by Gomez was incredibly powerful and exciting.

Again on The Will To Soar the artist brings a solid foundation with the guitar to start our new journey on this riveting composition. There was a nice mixture of folk meets rock, meets native flute on this offering, that I found most attractive and a song that changed its intensity, flow and purpose, almost like the composition itself, as it breaks free from its original substance.

So carefully we tread into the second half of the release and as we do so we arrive at my favourite track off the album entitled Embracing the Storm, using the power and natural sounds of a storm, the artist creates a track that is so addictive to listen to and one that reminds me of an old Johnny Whitehorse album from 2006, that same sense of intensity is there in the artist performance, and that very clever use of percussion also created one of the most inventive and artistic tracks I have heard thus far from him.

Phoenix Rising continues our theme of a multi-instrumentational flavour, and here Gomez ups the tempo, and through the flute performance and percussion, we are gifted one of the most rhythmic tracks off the release, we were the Phoenix that would eventually rise from the ashes of this tragic event.

As we move ever deeper into the album, we come across a piece entitled Under Open Skies. Here is a wonderfully warm offering that contains a global feel to its overall musical narrative. If ever there was a single to be released from the album it would have to be this one for me, vibrant, exciting, a memorable melody, and all wrapped up with a world styled rhythm that is simply undeniable.

One place to seek guidance in times of trouble is from ones Spirit Guide, I must admit, meditation and such exercises helped me through the worst of those times, and here on this penultimate arrangement we have a mysterious yet sincere offering, one that through its structures and the performance of the artist, gives us something we will always need, hope, although at times it was hard to see where that is actually going to come from.

The last musical offering from Timothy J.P. Gomez is called Earth Unbound, a piece that has a sensitive, yet rustic mood to its overall narrative, the organic nature of this perfect concluding track is sublime at creating a mood that sums up the picture of the album beautifully, and it’s uplifting resonance perhaps reason enough for carrying onward and upward.

Embers of Freedom by Timothy J.P. Gomez is in my view the best work from the artist to date, there is a balance and flow here that is pronounced, there is an energy here that is incredibly artistic, and the overall message from the album is deeply expressive and incredibly cathartic, without a shadow of a doubt, Embers of Freedom by Timothy J.P. Gomez is an album that is going to create waves of excitement within the Flute genre and the vast realms of lovers of truly good music.

Posted by Steve Sheppard at 3:06 AM