The Contemplative Power Of Water By Ali Ferguson 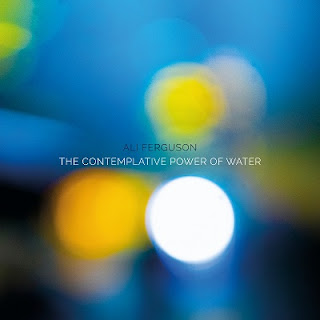 The Contemplative Power Of Water

It is always an utter treat when Ali Ferguson releases an album; it’s like an extra birthday present, one that you simply cannot wait to strip the wrapping paper off and gaze longingly at the contents inside. The Contemplative Power Of Water is this new release, and we’re about to embark on one of the best voyages through music within the last few years through the medium of this album, one that will salute the progressive side of rock with such style and panache.

This sojourn starts with the quite breath-taking title track itself The Contemplative Power Of Water (Pt. 1). This fast paced gutsy opener is a perfect starting point on what is simply an outstanding album, one that I find myself on my third consecutive listen too. If anyone was ever curious as to the guitar work of the artist, I would point them to this very song, he shines like a crazy diamond upon it, the fluency and smoothness is impressive, as are the quieter segments, the build and progressions and the added electronic touches too. I must thank Ali for the idea of audio within tracks, as this is something I do now on my own compositions, its creates a very effective narrative indeed.

Children Of Men is our second port of call, and what a colourful and interesting beginning it is, almost native and indigenous in its opening essence, but the build here was something deeply amazing. I truly appreciated the amazing texture of this composition, rocky yes, but incredibly artistically layered and consistent in its pure quality, may even be single material, with its memorable melody and hook.

One of my favourite pieces when I first played the album was this next offering, with its natural sounds, that nature feel and the sublime almost Zeppelin acoustic opening, The River Crows quickly found a place in my musical heart. The artist’s velvet like vocals on this track, and the quite beautiful descriptive lyrical content, made this one for me very special indeed. Nice work can also be found on the onward gentle percussive presentation and the very appropriate work on slide guitar and pipes too, a track for a movie lies here without doubt.

Stare Into Sunlight (Release/Control) must be the most rhythmic piece off the release and one that was so very easy to listen to. This is one of those tracks that I love to use the term “a true harmonic convergence can be found here”. This is a vibrant offering that has to be saluted, and the use of that much desired electronic element is also really appreciated as well, this goes on to manifest an arrangement that is so appealing to listen to, but also one of those tracks that literally makes the hairs on the arms stand up whilst listening.

The second part of the title track is now upon us, and another blissful moment of musical magic can once again be found here, pay careful attention to the audio narrative and sounds at the beginning, and then just drift on the halcyon moments created by The Contemplative Power Of Water (Pt.II). The hovering intensity of this track and the opening guitar reminded me so much of Pink Floyd that I nearly started singing “Remember when we were young” However here Ferguson takes part 2 and owns it totally, adding elements of electronica and a textured tapestry of tone, and we have another masterful performance that only goes to enhance abilities of the artist within this genre.

We now move gently to our next offering called The Catacombs, the opening to any Ali Ferguson song is always as important the main body of the work, it’s with Morse code we start this piece. The calm and soothing creation manifests a wonderful almost anthem styled opus; the whole mood of this piece is like a journey all in its own construction, and the artist is the master builder of that musical expression.

We now find ourselves on another world of musical pleasure called You Can't Hold An Ocean; if you want to improve your own musical skills, just listen carefully to the build and progression in this track, this is how it should be done, Ferguson is a master of the art. The texture of this song starts with a gentle cascade into an ebullient and full flowing composition that is simply undeniable.

The penultimate track off the album is sheer genius and brings forth some of the best song writing from the artist thus far perhaps. Peace Begins With Me would indeed become another personal favourite of mine, any song that moves me emotionally will find its way into my heart; the keyboard segment here is pure prog, while Fergusons multi-faceted talents reach a crescendo of class with his guitar solo, on what I believe is one of the best compositions as of yet from the musician.

Our concluding offering is the completion of the title track as we arrive at The Contemplative Power Of Water (Pt. III), this reminds me slightly of Roger Waters in its opening foray with ( 4AM Go Fishing), but warmer, however that soon changes. Here the artist brings us his longest offering off the album at well over 10 minutes in duration, the track itself is an incredibly complex creation, with a mix of eastern musical motifs and a global fusion, one that eventually melds into anthemic progressive rock moment of utter genius; one has to say going out with an arrangement like this would be enough to instigate a standing applause from even the most ardent arm chair rock enthusiasts.

The Contemplative Power Of Water by Ali Ferguson has been a most enjoyable experience for me personally, as I hope it will be for you as well. Here is an album that comes from the very heart and soul of the artist, and contained within are 9 tracks of sublime brilliance, perfectly produced, wonderfully performed, and intelligently created. The Contemplative Power Of Water by Ali Ferguson surely is an album destined for an awards nomination in its near future, it is that good and an album thoroughly recommended at all costs.

Posted by Steve Sheppard at 3:18 AM