Now & Then By Dennis Milone 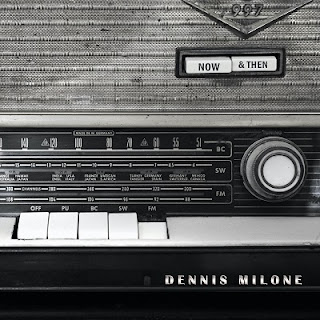 On this hazy lazy early summer day I had the pleasure to sit and listen to the latest body of work from the artist Dennis Milone called Now & Then, and what a blissful and easy on the senses journey through new music it was, a delightful pastiche of instrumental music indeed.

This voyage starts with a lively opener called Homecoming, the upbeat musical narrative here made this song for me, one to certainly start the day off in the right mood with, the performance from Milone was vibrant and exciting and a creative beginning to the album, one that set the scene perfectly for the remainder of the release.

The bass and beat within the track Saint Peter's March reminded me of a song from the 80’s, but still at this moment I haven’t as of yet recaptured that memory, however there is something a little Mike Oldfield and Portsmouth about this piece that makes it so addictive.

Satori was one of my personal favourite tracks off the album, not because of my Buddhist persuasions, but a Satori is said to be unexplainable, indescribable, and unintelligible by reason and logic, and I am lucky enough to have been there, the powerful energy within this wonderful track reminded me a little of Jean Michael Jarre a times, but I felt more inclined to reference another sublime release by Jonathan Goldman called Chakra Dance, some maybe surprised at the intensity of this piece, but this is a sublime representation of an awakening through music, craft fully done indeed.

This next piece is an interesting composition; it’s called Father & Son and is a track that has a pleasant light touch to its proceedings, the keyboards are so wonderfully fluent and bring about a creative increase in intensity flow and intention; the melodic structure of this track was a veritable meeting of the minds, as the entire arrangement seemed to have a blissful symbiosis about its essence.

As we move deeper into the album we come across the idyllic offering called In the Meadow (We Dance), the Folk motifs are so evident here, and one can imagine a glorious happy summers day across the fields of some green and pleasant land occurring. The keyboards of Milone were the master narrator here and his talents created one of the most addictive and memorable pieces off the release.

The penultimate offering is called Final Day; once more the brightness of the composition was quite delightful, and the gentle beat drove us along the country roads bathed in sunshine and happiness. This offering from Milone has an almost anthem styled melody to its build and construction, and would be a clever track to end a concert with.

A Love That Never Was is our final port of call on this voyage through an instrumental dimension with the artist Dennis Milone. Here the musician sets things up perfectly to draw a concluding curtain across this stage, with what is a truly artistic, slightly emotive and clever composition, the build and progression leads us through a compelling song, and inevitably to an ending that leaves one feeling completely fulfilled and happy.

Now & Then by Dennis Milone is an exciting and vibrant new release, that purveyors of classy instrumental music would be wise to make part of their own collections. It is a creative mixture of musical memories, wonderfully weaved together in a musical tapestry that retains the ever eager ear of the listener, here within lies a fine example of really good contemporary instrumental music to thoroughly enjoy.

Posted by Steve Sheppard at 9:57 AM