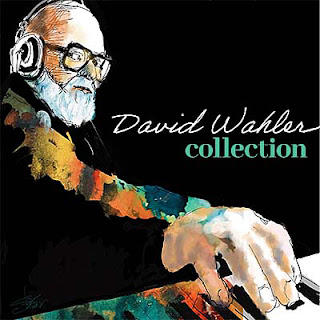 There are times when a certain album lands in your lap, and it changes your entire perspective of the day unfurling, this just happened to me, my day was sluggish and unremarkable, but once I started my listen through of this new David Wahler album, I found the calmness and beauty inside of me grow with each passing song, the album in question is Collection, and it is within the realms of this beautiful release we now take a willing voyage.

The opening piece for me was a marvellous moment of great beauty, and reminded me in parts of early Medwyn Goodall, and his piece Misty Morning Water from 87, Wahler has created here an idyllic composition that completely lives up to its title of Lost Coast with sublime ease.

The following musical narrative had a wonderfully light energy about its construction and entitled Lila; the fluency here was a key element for me, as the composition just manifested different aspects as it went, but always kept that quite chilled, and almost cloud like essence about its overall construction, a bliss filled opus of peace with ease.

The realms of darkness have been reached here as we listen to Noctorno, the main theme and melody were both emotive and idyllic, the scene was set perfectly by Wahler on keyboards, creating a relaxed and incredibly atmospheric resonance at all times, in an arrangement that drifted within the early dream like minutes of a new days birth.

The gentle opening to this next offering was utterly beautiful; the track in question is called Invictus, and for me highlights one of the reasons over the years, that David Wahler has been regarded in such high esteem. This is his tenth album and manifestations like this mellow and healing creation should be appreciated for the calming narrative that it creates.

The curiously entitled Easy Peasy is next up on our playlist of plenty, and here Wahler brings to the table a truly chilled vibe that reminds me of classic Phil Thornton from the latter half of the last century. The vibe here is simple and relaxed; a wonderful offering for relaxation indeed.

The deeper waters of the album are reached, and as we arrive on this sublime musical shoreline we are greeted with a splendid composition entitled Adagio ála Carlos. The adagio mood was wonderful, and reminded me in temperament of Ravel’s work at times, this is one of those mood filled opuses that you never wish to end.

We have reached our penultimate track, and this delicious arrangement is called Rite, the ethereal vocalisation here added such a pleasing layer of a musical tapestry into the proceedings for me, so much so, that I found the entire track quite emotional, this would indeed be one of my favourite pieces off of the album, one that I feel will be with me for a long time to come.

Our last track is something that a majority of us would ask for and called Peace On Earth, it’s easy if you just try, it’s easier without an over bloated ego, and here on this last magnificent arrangement Wahler sums up that with a sublime ease, the natural sounds show just how easy and calm life is on our planet without our childlike protestations and fears. The slow, but wonderful construction, the idyllic build and progression on keyboards in this concluding piece, were simply the best way possible to end a superb album.

Collection by David Wahler is the artists 10th release and after much consideration, and in my opinion, I rate it to be his best so far, he has taken those strange moments of isolation and lockdown during the pandemic, and from those moments of introspection, produced one of the best new age albums of the year thus far, this was one release well worth waiting for without a shadow of a doubt.