To An Audience of One By Steve Sheppard 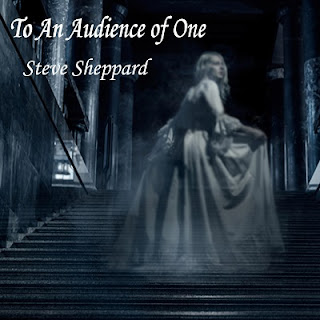 To An Audience of One

To An Audience of One is the debut album from Steve Sheppard, it consists of 7 wonderfully performed and constructed arrangements, four of which were released as singles over the past few months.

The album opens with Riccos Beach with features some additional keyboards from Andy Rogers, I love the natural sound of the sea as the waves crash against the shore, the elements of Cypriot music that remind you of times when the world was a different place, and the laughter of children as the piece ends, bringing us signs of hope for the future. This is a great way to open the album, and gives us a taste of what is to come.

We move on to The Shipwreck of Demetrios II, created about a ship wreck off the coast of Paphos, one that we see on a daily basis as we go for our walks. There is a haunting start to the arrangement as it builds, then as the bell comes in, warning of pending danger as it is about to crash onto the rocks. The sound of the waves continue in this arrangement too, adding to that sense of impending doom, as the track goes back and forth bringing in echoes of the past. This is a wonderful creation that concludes with the sounds of Cyprus once again.

Next up is Wisteria House, now I know the building that inspired this piece of music, an old traditional Cypriot building that is now standing empty, nature taking over the land it stands on again, but through it all, you can still see the wonder that it once was and the trees that surround it growing still. This is another descriptive piece that brings in echoes of the past with elements of the now in an intriguing way, making it one of my many favourites from the album.

Our next arrangement is also the longest one on the album at just over 9 minutes; it is called The Mountain of Adonis, a place we have visited many times. I love the swirling synths; the magic that can be felt from this glorious mountain comes through within the music so well. Listen carefully and you can hear that gentle wind that blows through the mountain too and the wonderful storm that concludes the composition.

We now come to Music for Empty Airports, a piece of music that Steve created during a time as the world struggled with the pandemic and things were closing down, making travel impossible, we were stuck at home, not allowed to leave, not sure how and when things would change, but over time, as we all came to terms with what was happening, there were signs of hope. The world had become quiet, but then one day, we heard a plane fly overhead, something we had taken for granted before, now suddenly the sound became so important, it was a sign that things were changing, and the music in this arrangement truly highlights that so well.

Winter Sunrise is our penultimate composition on the album, with those wintery elements captured so imaginatively in the music. Once again, natural sounds and synths combine, bringing us a piece that gives you the space to sit and enjoy those moments, as a winter sun starts to rise and the birds sing their greeting to a new day.

Walking on the Edge of Occam's Razor is our concluding arrangement on the album, opening with a single singing bowl, that comes and goes in the track perfectly, this is an ideal way to leave what has been a wonderful journey with the artist, as he has shared moments that have sometimes been difficult and other moments of great pleasure, told through his music so perfectly.

This is a wonderful debut album from Steve Sheppard, and leaves me wandering what will come next from the artist. This is an album he should be very proud of, as it contains so many wonderfully constructed and executed arrangements, and is an album that anyone who loves good music that is heartfelt and deeply emotive would be proud to have as part of their collection.

Posted by Steve Sheppard at 5:12 AM