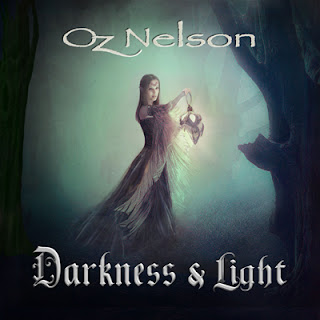 I have long been an admirer of the work of Oz Nelson, in fact ever since he first came onto my musical radar back in back in 2016 with A New Beginning, and I have I been transfixed to each and every release that has been forthcoming from the artist, his creations are vast cinematic soundscapes that each tell a story, and like the music, the narrative is very compelling.

On Darkness & Light there is a wonderfully enticing mystical element to enthral us eager listeners, listen to the powerful almost rock start to the album entitled Darkness, it is also one that features the talents of vocalist Elvya, then into a David Arkenstone styled arrangement called The Quest, the orchestral manoeuvre’s here are sublime at creating a cinematic perspective.

There are powerful forces at work on this album, and one can be pulled into this tale of darkness and light with ease through moody compositions like the depths of pieces like Call to Battle, or have you mesmerized by the addictive energies of songs like Claws of the Desert, a piece so vast and dramatic it is almost impossible to escape its grasp, here the artists skills on build, progression and climatic conclusion are simply brilliant.

The penultimate offering is called Freedom, Nelsons composition here manifests that potential through the clever arrangement of this song, hope, a chink of light, and a way out of the dark, are all very cleverly built into this last but one effort on the album.

The conclusion is given to us through the piece Into the Light, a fine ending composition that sums up the journey taken, one that has had its perils along the way, but success is at last found in an uplifting and vibrant last final composition from the artist.

Darkness & Light by Oz Nelson is another graphic work of musical literature from a superb composer, whether describing a fantasy novel or the twist and turns of one’s life, no one can be in doubt that Oz Nelson is one of the finest composers of dramatic soundtrack based music around today, and film makers should be put on notice of this. The album will take the listener on an addictive journey, and never let them go until the very last note fades into the darkness, or should that be light!

Posted by Steve Sheppard at 3:02 AM