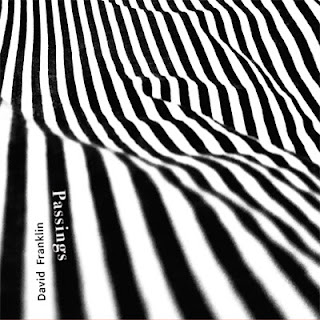 The hardest part of living is letting go of those moments, people, places and occurrences that were so very dear and close to our own hearts, Passings by David Franklin explores that narrative though this fine and fluent instrumental music album and in doing so goes someway to creating a musical panacea for each and every one of us.

One of the delights of this album is the inclusion of additional artists of great quality; one of them starts this album off with Franklin in the undoubtable best fretless bass player around in Michael Manring. I’ll Never Hear My Father’s Stories Again is a combination of moving and emotive soundscapes that remind me of great times with sad tinged side offerings with my own father, that indeed those days are gone and all that is left are fading memories in a warm heart.

There are no less than 15 amazing tracks on this blissful instrumental paradise, and a classy moment of piano by Franklin can be found on the track Laughing In Whispers, while the piece Another Perspective features Alex Franklin, also on acoustic guitar.

Each track on this album is beautifully produced and each also has their own specific mood and energy, like the reflective Perspectives (feat. Michael Manring), a light presentation of a sun kissed structure can be found here, while on Dancing in Memory we have one of the most haunting and emotional offerings off the release, one can imagine walking through dust filled rooms to this track, what was once a veritable hive of activity, now crawling shadows of times long since passed, a wonderful example of lush and emotional solo piano can indeed be found here.

David Franklin closes this intriguing album with A Musical Essay (for music-box) this clever short form composition is a very memorable and unique way with which to end the album.

Passings by David Franklin is an album that allows us the listener draw our own curtains down on our specific passing’s in whatever guise they come in. Personally I found the release almost cathartic in nature, it is a veritable rainbow of colourful, it’s moving and sometimes quite touching creations that each need to be listened to on their own merit, and without doubt one of the most artistic and intelligent albums I have heard thus far this year.

Posted by Steve Sheppard at 1:36 AM