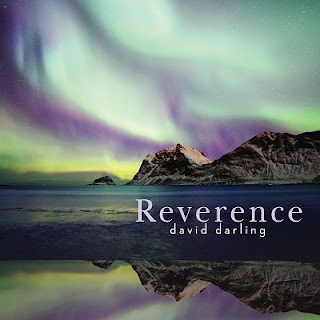 I have known of David’s work for a few years now and have always been mesmerized by his stunningly emotive, yet calming performances on the cello, here on the late artists last album Reverence, he brings us one of the most beautiful moments of instrumental music of the decade thus far.

The former Grammy winner back in 2010 is a much respected and renowned name in the New Age genre, and Reverence is a pastiche of colour and tone that will ease the soul and calm the mind, from the very first track entitled Water Dragon Waltz the mood is created and manifested with such style and utter fluency.

This 10 track album is packed with delightfully serene, but inspirational performances, like my personal favourite of them all, the stunning For The Love of Oceans, a neo classical pleasure that contains one of the finest segments of cello I have heard for simply ages. Combine this with pieces like the title track Reverence, one of the most ambient offerings from the release, and the mirrored energies of Water Mirror, a New Age music lovers delight, a soothing tapestry of tone that has meditative qualities in abundance, it then becomes quite apparent that this has to be one of the finest New Age styled albums of the year.

The penultimate composition is entitled Entering and is a manifestation of a calmness and focus in instrumental music that is extremely rare to find, Darling was indeed a master of his instruments of choice, and his arrangements and compositional structures show him up to be one of the finessed creators of New Age music of his day.

The album is concluded by the longest track off the album in I Don't Know Yet, this wonderful mixture of the classical and instrumental styles reminds me of many layered soundscapes I have heard throughout my years, a piece that is perfect in its art of musical description, and one I found profoundly moving and deeply emotive.

Reverence by David Darling is an album we should all have in our instrumental music collections, for without doubt it is one of the best I have heard for literally ages, we must also pay homage to the other musicians who so wonderfully have given their skills to this most prestigious of projects in, Paul Fowler (Keyboards), Ross Bellenoit (Guitar), Katie Mintle (Vocals) and Ty Burhoe (Gongs), all of which have appeared and performed on a release that is some of the highest in quality sound and tone that you are ever likely to hear, this is an album I cannot speak loudly enough about.

Posted by Steve Sheppard at 1:40 AM