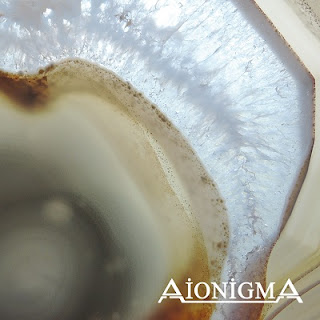 Aionigma are an Austrian overtone music ensemble compromising of artists Bernhard Mikuskovics, Jodel, Fujara, Rav Vast, and Gerhard Kowarz. The instrumentation is far and wide and very different as well, but here within lies one of the most fascinating creations manifested by a band this year, as we begin our journey through the ages.

Our starting point is a well-known offering entitled Allelujah, this Gregorian chant styled piece shouldn’t be overlooked, as its complex plainchant is a skilful thing to achieve, but it has been done beautifully and contains melody, harmony, rhythm and form with such ease and style.

Following this track is a creation entitled Sungaze, a more gentle start you will not find. Here is a composition that has a delicious rhythm to its progression, with the inclusion of a veritable orchestra of light percussion and instrumentation, this piece gifts us a radiant offering to thoroughly enjoy.

Aionigma is also of great interest to me as I live on an island that is birthed from ancient Greek culture, the word itself is made of 2 Greek words, "Aion" and "Ainigma“ so together translated loosely means infinite secret, that energy is within this quite creative and artistic album, and tracks like Synode are a fine example of that, the translation reflects an assembly of sorts, and through the music one can perhaps feel that begin to build, through the tonal structures one can also sense a meeting or gathering beginning to occur, in what is a quite fascinating opus.

Der Lindenbaum truly encapsulated me, a piece filled with the energies of nature and growth, the light and rhythmic guitar along with the vocals manifested something truly peace filled and listenable, and reflected a folk styled ethic within the creation of its arrangement.

One of the things that truly rooted my attention was the ability of this album to take me on various twists and turns and many musical footpaths along its way, an example of that can be found of the almost dance styled offering of Taklimakan Blues, with eastern influences, and the inclusion of the Jews Harp, one could easily be moving in a caravan across a wide far reaching desert.

There are several unique creations on this album, one would be Draeo, and a Jews Harp leads in to a colourful array of vocal mastery, one which flows with great style and panache into the title track and band name itself on Aionigma. There was something so simply beautiful to listen to here, it encapsulates everything harmonic about Gregorian chants, and bathes the tones into an eternal ocean of timeless vibration and harmony, and this would indeed be one of my personal favourites from the album.

When I first heard this piece it was instantly recognisable, An die Freude was originally set to music by Ludwig van Beethoven using the 4th movement of his 9th Symphony, here on this piece guitar overtones and other assorted instrumentation, give us a harmonic convergence of utter beauty on Ode an die Freude that will long stay in our musical hearts.

The penultimate piece is entitled Wurzhorner, one of the main gains from this album is the research I have had to do during the creation of this review, and from that I can inform the listener that this long form opus of exactly 10 minutes is the longest track off the album. Wurzhorn, means a kind of alphorn, once well known in the Dachstein region, the classical Wurzhorner has a length of 10 bars, two and two bars joined together, shaping in the whole a simple ternary form, so now you know all of that, sit back and listen to some of the most addictive musical vibrations you may have heard on this almost meditative composition.

We can now conclude our journey with the final track off the album entitled Aiono, mostly translated as eternity, although this in ancient Greek would originally be known as life or life time, this is our final port of call on our musical journey with the band Aionigma, it is a wonderfully ambient ending and also a clever track to finish with, as, is it just the end, or, the end of the beginning!

Aionigma by Aionigma has to be one, if not the most original albums I have had to write about for a few years, the productions and performances that are contained within are some of the finest, and should appeal to listeners who had a fond passion for Gregorian chants and folk music across a general musical landscape, and for those intelligent musical seekers who are always searching for something to satisfy their melodious desires.

Posted by Steve Sheppard at 2:34 AM