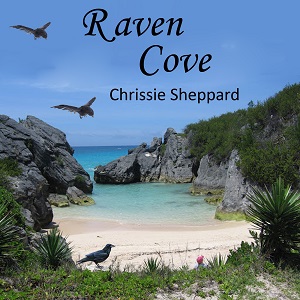 I have always had an affinity with the sea, I grew up near the coast, and it is something that has always been important to me, water is connected to emotions and whenever I needed to let go of things, if I needed to re-energise, I would go to the sea and sit and watch its movement and breath in the healing energies. For me the sea and the movement of the waves and the tides represent life.

I spent a lot of time with my Dad near the sea as a child, on days when he was not working, we would go to the shore and spend the day together, sometimes just watching the movement of the sea, others walking along the seafront, sometimes simply in a small rowing boat at the local lido, we even used to play Pooh sticks there, throwing our sticks into the water from the top of a small bridge and running to the other side to see whose stick was going to come through first. These were magical times that bring me great comfort, special memories that will live with me forever.

Raven Cove for me is a piece that reflects our lives, sometimes life is easy, everything seems to just go exactly how we want it to, but at other times it seems so chaotic, as if nothing will ever go right, but things always change, we just never know when and how this will happen.

I have always felt a really strong connection to birds too, my children used to laugh and say I would be like the bird lady in Mary Poppins, as I would sit and talk to the birds in my garden when they were younger, I still do.

The raven is known as the “Keeper of Secrets”, and like all birds it is a messenger between the heavens and the earth. The raven encourages us to look deep within ourselves to seek answers that we can put into motion and make those most important changes. The energy of the raven can be called upon, and the messages that it gives us, can sometimes be difficult, but in order to grow and move forward, we need to soar over these hurdles and obstacles that are placed in our way, only then can we truly move past any perceived barriers and flourish.

My Native American flute is the air that we breathe, the air that helps us take flight, the instrument that enables us to fly like the raven. The sound of the sea is a recording I made here in Cyprus, something that was not as easy to do as I thought it would be, as getting the sound right, without people talking was more difficult that I had ever imagined.

I would like to thank Andy Rogers, as he added some wonderful synths to my music, which really enhance it, and made it more magical.

Listen carefully, and follow the journey of life, with its ups and downs, until finally, the raven sets you free.