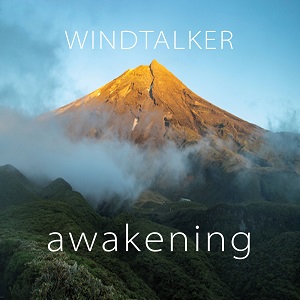 It is always a very good sign, when you click play on an album your about to review, and instantly your first thoughts are a simple wow, an exclamation of utter beauty, and the experience that I have now been bathed in was nothing short of an exquisite sojourn of magnificence.

Randy “Windtalker” Motz and his latest release Awakening brings us the ever eager listener a dimension of calm and tranquillity to reside within, and contains 12 simply delightful pieces to enjoy.

I must first mention Windswept; here we have a track that sets the scene with such perfection, the natural world and all of creators’ creations will sit up and listen to this, it is simply the most beautiful way to start an album, and to follow it up with the reflective genius of Breathe was masterful.

Keyboards and native flute never sounded so good, I can assure you that this will be a journey of fascination and sublime skill, listen to offerings like the haunting Timeless. The depth of performance here was crafted and the ticking of the clock was a clever addition to the composition.

Awakening has many gems within the album, another one of my personal favourites would be Solitude, bird sounds set the scene and then the flute enters the clearing, setting a view so panoramic and green. The entire composition was so warming one could have easily been sitting in solitude in the middle of a great forest with ease.

The magic of the skill of mood setting could be found in Ethereal, an utterly timeless offering, while the gentleness of touch and ambience was so craft-fully played within Silhouettes and the final composition Sojourn, a piece that raises the rhythms slightly and acknowledges the completion of the project with such tenderness.

Awakening by Randy "“Windtalker”" Motz is a classy 12 track album that in my view is easily his best work so far. The entire album exudes an energy of love and respect, both for his personal path and the native peoples of Turtle Island themselves. Awakening is a release of positivity and great beauty; one packed with colour and passion and surely must be heralded as one of the most serene albums to have been released this year without doubt.

Posted by Steve Sheppard at 3:00 AM