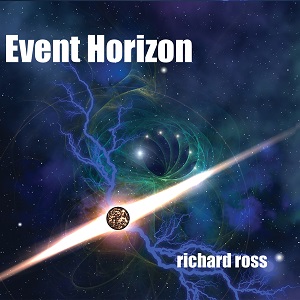 Richard Ross is back with another release of electronic mastery and trance with his latest release Event Horizon, the follow up to his Entropy album of 2019, and I have a whole new appreciation of this style of music after hosting a chill out show for the whole of this summer on radio.

The opening piece was fascinating, utilising a neat pitch bend and some very classy electronic beats; Bent Light got this amazing journey of sound and tone off to a flying start.

The album has seven colourful tracks within its realms and all of them crafted to such a high quality, the floating essence of Dark Matter’s opening notes gave us an enticing moment of suspense and a beautifully fluent arrangement, whilst the title track Event Horizon has a smooth and easy downbeat styled trance ethic to its overall composition, one that contains a wonderful sense of movement within, much the same way as a Jean Michel Jarre track used to do back in the day.

Event Horizon is a really craft-fully produced album, but that is Richard Ross’s specialty, everything he touches sounds simply idyllic and classy, other tracks with that chilled vibe would be Oort Cloud a stylish opus, Plasma a composition with such an addictive vibrancy about its construction, and Thermals, a vast wide open composition that takes the listener to new heights of musical exploration.

Ross finishes his latest offering with what would be one of my personal favourites off the album, the sultry tones of Vortex, if you ever wanted to hear a track with a truly masterful build and progression contained within then I need to point no further than this piece.

Richard Ross in my view has created his best work so far in this style, this smooth and extremely classy chilled vibe with trance motifs, really hits the centre spot of the musical dart board, it is an album that I think will resonate with a lot of listeners who are looking for something easy on the ears but with a little edge. Event Horizon is an album of pure bliss, and forty minutes of musical magic that is so easy to recommend.

Posted by Steve Sheppard at 4:14 AM