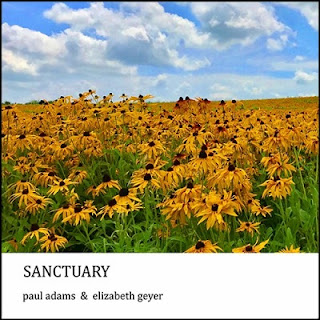 A sublime moment was crafted on musical stone back in 2019 when the release of Deeper Imaginings by Paul Adams & Elizabeth Geyer was brought into the world, now with the release Sanctuary some 3 years later, the duo are back with another amazing new album.

The opening composition for me is always one of the most important parts of any release and here on the title track itself both artists with piano, flute and guitar, bring one of the most sublime starting pieces I have heard for simply ages. Sanctuary is a wonderment of ambience, calm and tranquillity, and is also deeply moving too, it has a hovering intensity that is utterly mesmeric.

This 9 track album is a catalogue of brilliance, with the delicacy of offerings like An Evenings Caress where the performance is so tranquil; never has there ever been a title to apt, to the wonderland of Forest Light, a track that has a blissful meditative quality about its construction, and then into the arms of mirrored pool of pieces like Graceful Waters, starting with pristine natural sounds that morphs into one of the finest new age styled compositions of the year thus far.

It is going to be hard to see this album not flying up the charts, tracks like the penultimate offering An Endless Summer Evening, redolent of my days right now, those endless warm July nights, would drift perfectly with the multi-instrumentational magic of this track.

The final parting gift is incredibly special, and a creator of a tapestry of emotive and idyllic images entitled By The Water’s Edge, a concluding presentation of harmony ambience and tranquillity all rolled into one, and no better way of ending an album have I heard this year, than this last masterfully peaceful arrangement.

In my view this has to be one of the best New Age music releases I have heard for many years, and with Sanctuary by Paul Adams & Elizabeth Geyer the magical duo may have just found themselves with an award winning album of true majesty, on an album that sends its beautiful healing vibes out into the world for those who are open minded, and open hearted enough to embrace what I believe to be a truly stunning new release, and a multi-instrumental delight.