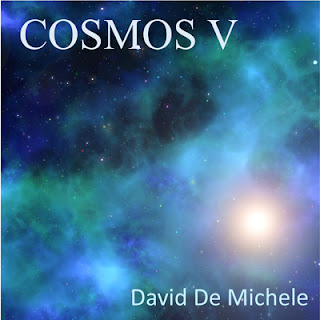 Here is an album that is right down my street, an ambient electronic pastiche of both great colour and style, and by the artist David De Michele of whom I have an album of that dates back to 2003 (although that was not his first release), and here some 19 years later he births his latest masterpiece Cosmos V, and one has to say it is one of the most translucent, inspiring and moving albums I have heard since Kevin Kendle released, Light From Orion, it is that good, so let’s journey with the artist right now on this 7 track album.

The opening piece has such an amazing emotional resonance to it, it literally takes your breath away, the build, flow, drift and emotive synth chords construct one of the finest openers in this field I have heard for many a year, of course we are talking about the headline piece Cosmos V.

With tracks like Event Horizon we have a steady, but progressive motif, one that builds, hovers and smoothly traverses the universal airwaves. While on Central Sun, we have a blissful sense of ambience, but a track cleverly textured to bring us an emotional vista, it is as if we are truly looking at an ever expanding sun as we drift towards its life giving warmth.

On Expanse, there is a delicacy that is so beautifully created, it’s like someone has opened up a small portal to a vast expansive realm, and explores the emotions from that event, then we slowly flow into Light Speed; a track with expectations, where an almost Berlin styled school opening foray of electronic music creates an onward movement ahead, in a wonderfully manifested arrangement that is performed with such a masterful presentation. I was reminded in part of the late but great Vangelis and his Albedo 0.39 album with this offering.

The penultimate offering off the album is entitled Stellar and now we may enter the womb of the galaxy, to gaze upon the nursery of stars being brought into existence, the slow wave like synth forms, brings us an ocean of calm and security, where one could literally be at peace for en eternity.

Our concluding track is entitled Origin and is utterly the finest work of art for us to part ways with the album, the performance here was brilliantly played with a fast repetitive Oldfield styled repeated segment, and juxtaposed by a slow soothing synth, both would amalgamate and finish off the album in great style.

Posted by Steve Sheppard at 1:30 AM