Into the Unknown By Joseph L Young 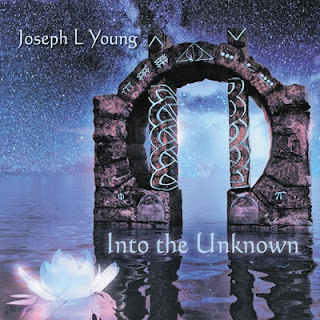 It is so very good to hear once more from multi-instrumentalist Joseph L Young, the last album outing I have with the artist was way back in 2018 with one of his most awesome albums of all time in Every Moment, but here we are again, and about to open up the door to another wonderful journey of deeply expressive music with the album Into The Unknown.

This voyage of musical plenitude starts with one of the most cinematic offerings I have heard from the artist, it’s called Into the Unknown and is of course our very classy title track. Living in the Middle East this really resonates with the energies that are around us here, using a far and wide multi-instrumentational ethic and a that stylish Duduk, gives us the listener the most perfect starting point ever.

The following piece is a musical narrative that is so moving, it’s is the emotional presentation Remembrance of Time ft Lynn Tredeau on piano and for my money is one of the finest duets that Young has ever done. Tredeau has an incredible way of making her piano almost cry, whilst Young’s flute performance is heart rendering and utterly emotive.

The opening few bars of this next piece truly drew me in, once more a multi-instrumental nature is employed, ethereal vocalisations too, and all roads lead to the artist and his trust worthy flute to lay down a mood that like the album, crosses more boundaries than many other artists would dare to even attempt in a life time, I detected a wonderful mouth harp here too, after research I would find that it was actually Vietnamese instrumentation, which then made perfect sense to me as this piece.  Enchanted, certainly had a delicate eastern feel to its overall construction.

One can have no doubt that Young is one of the finest performers of his time, and with ease has to be the most unique of creators, and by switching to sax on Secrets of Stone, once more the borderlands of music are not just crossed, they’re torn asunder. Young’s presentation here manifests an almost global Jazz ethic; the tabla and percussion were sublime and would go on to create a rich and colourful vibe, and at times one with a deep sense of sensuality with its slow and sultry Middle Eastern energies and rhythm’s.

You always find a track that resonates with you and on Beyond the Horizon that would be the tick in the box for me, this is a fascinating piece, it contained an electronic vibe with distant echoes of Vangelis, and keyboards that would pick the composition up and take it along on its merry journey through time and space perhaps. A mysterious expedition through music can be found here, but one I am sure you would be more than willing to take.

Strange, I should be writing about this track today, as I was only thinking yesterday about composing a piece referencing the conflicting energies of the mind and heart for my next album, but on Between Worlds (Remix), we have a masterpiece of duality, the flutes of Young are the knowledgeable narrator. This is a wonderful arrangement that completely reveals the dichotomy of being between two worlds and lost in love, one that reminds me greatly of Phil Thornton’s similarly named track back in the late 90’s, this one Joseph, will become a total constant for me forever.

As so this voyage of brilliance continues with a nice feel on this following offering entitled Transcendence, a piece that seemed to have an almost Richard Carpenter electronic and percussion styled feel to its sonic backdrop, but the Sax of Young lifted the piece to new levels, to give it a brighter energy, the added vocalisations were a blissful addition as well.

We can fall deeper into the layers of this album now and as we do so we come across a track called The Forgotten, again this is an incredible mixture of styles, modes and musical gestures, and no one does it quite like Joseph L Young. The darkness shines so bright on this track it’s palpable, and the sullen and moody progression of this composition is akin to walking the borderlands of Stephen King’s Mid World and indeed, this amazing piece would be perfect for the movie should he make one, wonderfully descriptive, deeply moving and a hovering intensity that is so very rare to find these days.

We now arrive at the longest composition off the album and this expression of utter quality is called Eclipsed. This is a clever offering; one can enjoy the fairly light mood created by Young’s colourful flute, but all the while behind the main narrative is an intensity that needs not to be ignored, the build and progression here with electronics, leading into a percussive upbeat and then into the sax, must make this piece easily the most creative from the album.

The penultimate arrangement is this very classy moment, now known for ever in time as Windswayed. The piece has with ease the most indigenous textures within its clever frame ever; yes Young’s flute manifests this mood, but then the artists skill set of artistic genius kicks in further and the track elevates to a piece that is both the wind, the tree and the leaf that flies on to lands unknown.

So we have reached the final portal to the album, the name of this concluding piece is Ancestral Crossings, this is an utterly perfect song to finish what has been a superb album. The mood of this track is multi-dimensional as well as being multi-cultural and instrumental, if there was one piece off the release that could sum up Young’s talents in crossing musical borders and genres, for me, this would be the apex of that search.

Posted by Steve Sheppard at 3:31 AM