The Gift of Fire By Anantakara & Jack Hertz 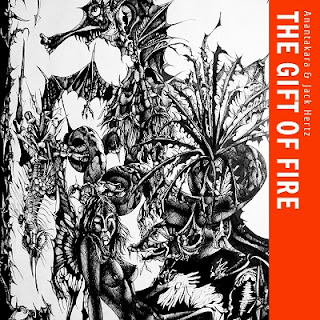 The Gift of Fire

Anantakara & Jack Hertz have combined to bring us one of the most compelling electronic music offerings of 2022. The Gift of Fire is a moody mystical and sometimes dark work of art that is simply inspiring and incredibly addictive; here is a work that listeners and purveyors of sublime instrumental music that would be all too easy to get lost within.

The opening piece, A Moon in a Cave, is a swirling almost hypnotic arrangement that has many cogs to its musical wheel, the music and performances on this track alone are sublimely created, and draw the listener in with consummate ease, this would be one of my personal favourites from the album.

I love long form narratives, and now I am a creator of such compositions myself, I appreciate them even more. Manifesting a long form opus is like writing a short story, you must allow your muse free will, but have an idea where the pathways of tone and timbre will take you. Here on The Princess and the Dragon, we have a duel arrangement, one that drifts on the winds of tone and texture, but also one that is singularly inventive and free, a truly wondrous art form of a composition.

The Gift of Fire by Anantakara & Jack Hertz is an eight track album of great quality and artistic intelligence, and tracks like the amazing Bird of Redemption is a fine example of that aforementioned statement. This dark novella of a piece allows its shadowy figure to float in the dim realities of the arrangement, flowing from one electronic passage to another with such style, while the emphatically entitled Guardian of the Threshold simply demands to be listened to, but even though this track has its electronic signature firmly stamped on its cover, its base lies with a hovering intent on a bed of ambience that is both deep and at times almost sinister.

The final offering off this truly magnificent offering is entitled Ceremonial and is the shortest piece off the album at just less than 4 minutes in duration, there is lightness to it that is well received, and a composition that concludes the entire project brilliantly.

The Gift of Fire by Anantakara & Jack Hertz is a classic example of really good electronic music from two artists who really know there game, and are not afraid to show it. Here is an album that manifests realms and levels of electronic genius like never before, and they invite you in to wander freely, walking around its mysterious art gallery of vibrational tone, depth and misty creations. This is simply an album that you would be crazy to miss out on, and an absolute must for all fans of electronic music around the globe.

Posted by Steve Sheppard at 2:16 AM