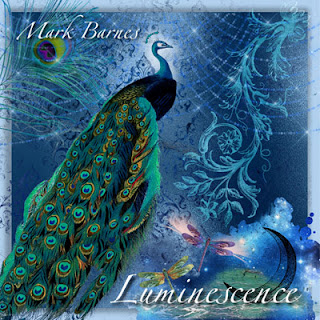 Mark Barnes is a seasoned musician, whose works span some 14 years of recordings that are all a wonderment of precision and class, here on this latest release Luminescence, we see a somewhat different style from the musician, and this walk across the borderlands of genres, brings us some of the most compelling work as of yet from the artist.

The opening piece is certainly worth a mention, as personally I have only ever heard Iron Maiden use Churchill’s rousing world war 2 speech to open with, here Barnes turns this amazing starting piece An Angel's Return, into something that reminded me of Jeff Wayne’s War of the Worlds, with its pulsating keyboards, percussion and flowing synths, what a sublime beginning indeed.

The following track could not be more different, we get an almost Zen like opening segment and that flows into a blissful stylish Mark Barnes classic called Afremov. If this is referencing one of the world’s best known modern art impressionists of our time, the artist has done a superb job, and this music would work superbly in a gallery containing his great works of art.

Reviewing a Mark Barnes album is always a pleasure and something to look forward to, especially when you come across tracks like Dance on the Moon; the regal and proud opening chords set the scene sublimely, then a light percussive beat kicks in to bring us an impressive keyboard driven vibe, you could also choose pieces like the reflective Where Did The Time Go, a song that truly emphasises the importance of getting the most out of each and every day given to you, in a presentation that will bring a tear to the eye.

As we approach the half way marker Barnes now turns to another hero in Martin Luther King, and uses his well scripted and known opening words to the track Dream In Color. The bold use of swirling synths here really brings forth Barnes desire to push further into his music, and allow his muse free reign of his imaginative process.

A contrast can be seen in tracks now, with the arrival of the composition Luna Nocturna and the usage of JFK’s famous quote about going to the Moon. Here we see a return in part of the bad boy of Chill Out, a famous Mark Barnes nickname, the laid back percussion; the rhythmic keyboards and multi-instrumental magic work on this piece, which must surely make it one of the most complex arrangements from the album.

We skip to the 60’s now and another famous orator and his speech about honour duty and country, of course I am referring to General Douglas MacArthur. The military drum beat leads us into a largely electronic based arrangement, even the guitar sounds and added instrumentation could have easily come from that era, in this most fascinating of tracks entitled Be Your Own Light.

This next track made me smile as it starts with a Mourning Dove; the piece itself is called Morning Calls and is traditional Mark Barnes in every way. The reason for the smile is that here in Cyprus we have Laughing Doves, and one has just made an appearance in my latest album as well! Here Barnes is on familiar territory, a full flowing melody, and a classy performance on keyboards to boot.

The penultimate offering is usually a very important point of reference, a position on the album you want to be just right before you conclude the project, and on A Beautiful Soul we have just that, a couple of years ago Mark released this song as a single, it was received well then, and I believe doubly so now, it’s a wonderfully charming musical narrative.

So we arrive at the final doorway to the album, and this is given pride of place to the title track Luminescence, and to probably one of the most important speeches of our existence by Stephen Hawking. We can now spread out into space with this last Mark Barnes composition, and it is also one of my personal favourites from the album, there is even a sublime Vangelis feel to this arrangement that is so breath taking, and my goodness, what a fantastic way to finish a release indeed.

Luminescence by Mark Barnes has to be the best work of the artist thus far; I seem to have been a fan of his music for so many years now, but here on Luminescence, and in my view, he has pushed himself harder and further, and really embraced the future. This has to be one of the most powerful and empowering albums of the year so far, and one very easy to recommend to anyone with an open heart and mind, and a willing ear.

Posted by Steve Sheppard at 2:26 AM