Physics of Light By Vicente Avella 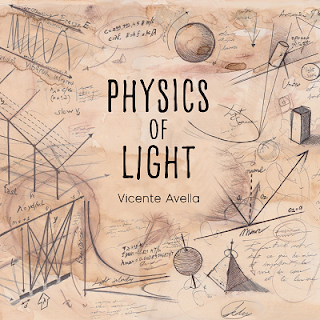 This latest album by pianist Vicente Avella is part of an ever growing collection of wondrous compositions created by the artist, however this 16 track creation now touches on one of my all-time favourite subjects, the qualities and physics of light. Physics of Light is a true journey through music and via the medium of the artist’s piano, I cannot wait to feel, hear and be part of this experience.

The starting opus is entitled Light Particles and the expressive performance here by Avella is both steady, with an onward motion that slowly builds with an underpinned confidence, one that leads perfectly into one of many favourites for me on the album entitled Radiance. Long have I admired the radiance and sparkling qualities of light on other objects and matter, for example the ocean, here this fine presentation is a flourish of magic that manifests the moment perfectly for me.

The slower and more moody aspects of Where Light and Shadow Meet is simply sublime and is another personal favourite of mine, the reflective minor chords and notes, bring about a blissful juxtaposition between light and shadow on this well-crafted piece.

A former single is up next and released back in 2021, Ultraviolet and its ebullient melody, still plays its harmonic bliss within my mind’s eye and reminds me of just how good a pianist Avella actually is, a tune also that wends its way into the arms of the next piece wonderfully as we arrive at the doorway of Oscuro, a song with a unusual structure, but never the less a track that is dark in parts, and also incredibly addictive to listen to.

The expressions, emotions and scientific reasoning about light is a subject that can spawn much debate on these next pieces, the artist does that perfectly well and illustrates this ever changing medium. Resistance has a quality of purpose and intent built into its narrative as well as containing a charming melody too, while Color Spectrum, has a deep rooted emotional mood within its construct, one that plays beautifully with the heart, whilst Claro elevates the senses to a height, one that almost lifts the soul from the body and into the universe itself, in what is without doubt one of the best performances off the album by Avella.

However when we reach this piece entitled Penumbra, we can honestly say we have reached a point of brilliance, as the artist plays with both light and shadow at the same time, in a presentation that is magnificent in all its aspects.

I love to stand in the late autumn and watch the beams of the sun dance with the first mists of the evening, October is especially magical with regard to this, this is the perfect time to engage Reflection, and just enjoy as the moment unfurls all around you. Vicente Avella on this piece has manifested my awareness of this time perfectly, in a track that is artistically sublime with each note played.

Time for a little Intermezzo, time to relax and enjoy a slice of peace and tranquillity with the pianist before he moves us to a whole new world with the track Opaque Object, here lies a sombre yet colourful tale, and a truly moving piano performance by Avella, a man who is fast becoming one of the most descriptive pianists around in this modern day.

We are now in the deep and darker waters of the release and as we drift on or boat of tone and timbre we come across Umbra, we can all witness this during an eclipse. Avella’s stunning performance here is so proud and resolute that it literally makes the hairs stand up upon the arm, probably one of the most intense pieces the artist has performed to date.

The slow slide into this next song is perfectly timed and placed as we move now to Infrared, an up-tempo presentation that creates a truly focused composition, one that flows perfectly into another favourite of mine in Antumbra; Vicente Avella’s expressions are so passionate here they are actually palpable and so very moving.

The final and concluding musical narrative is Visible Light, this was a truly clever move as this parting gift has a sense of an anthem about its construction and build, and reminds me of another composer Doug Hammer in parts as well, but simply put, the best way and composition with which to leave the album.

Physics of Light by Vicente Avella in my view is without doubt the best work of the artist thus far; this is an album of textures, colours, expressions and presentations, joined with the science of light itself, it is a superior release and probably one of the best in the solo piano genre this year with ease. Physics of Light by Vicente Avella is a must have collection of outstanding well created and crafted musical narratives, a true gem of an album simply too good to be missed.

Posted by Steve Sheppard at 3:15 AM