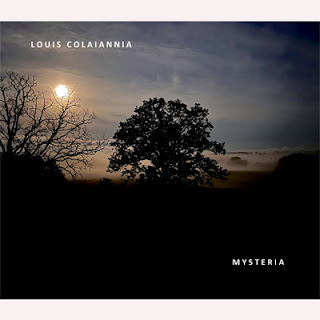 There are many pleasures in life, music is one of the biggest there can be for me, and then with regard to piano, one of the most descriptive of all instrumentations, there are those who can literally paint with the keys in the same way as Van Gogh did with his trusty brushes, a rare and priceless skill set indeed, in my view Louis Colaiannia is one of this rare breed, and listening to a new Colaiannia release is like receiving a Christmas present early, with that in mind we can now walk through this veritable art gallery of music entitled Mysteria with the artist.

I remember the opener well; it was a single release back in the dark bad old days of the year of 2020, a year that everyone wants to forget due to the pandemic, however One Day At A Time was an oasis of calm and a gentle flowing piano based multi-instrumental narrative that was a total joy back then and now.

Colainnia’s magical touch comes truly to the fore with the following piece entitled Gentle Touch, the string section here is quite beautiful and almost seems to dance with the artist’s piano, this has to be one of the warmest compositions I have heard from the musician.

As we move ever onward drifting in a dream of musical majesty, we come across a classy and clever arrangement entitled Along The Road; the keyboards here created a crafted soothing backdrop of sound, whilst the strings partnered Colainnia’s piano with all the love and respect it deserved.

Lonely Bird was another 2020 release that brought solace to our fearful hearts, this was a careful tender and delicate song that has stayed in my mind’s eye for an eternity, the stylish performance here by the artist is actually quite moving and emotional, and one can picture a bird in flight through the empty waste lands of time. Here one will find passion, empathy, intent and a sense of a building drama too.

On A Song Of Thanks (For Delome) different memories come to mind, the simple delicacy of this piece is a wonderment all of its own. Released back in the year of hope 2021 as a single, this almost anthem styled offering is a prime example of Colainnia’s artistic intelligence, and his fearless attitude of building an arrangement of such intense emotions and colours, and with a gentle running stream towards the end as well (a tribute to his childhood music teacher), ingenious indeed.

A New Day had a special feel about its construction, its build, progression and purpose reminded me of my dear friend David Lanz in style. The ever onward movement on the keys is utterly charming and almost reassuring for some strange reason, this piece had, and has, all that we need as we step into a brand new day, hope!

We move to the other end of the mood scale now with the track Melancholy, the sombre yet colourful narrative here is still a charming yet reflective tale to take in, and the artists presentation here, also has a haunting, almost jazzy energy to its overall composition.

The intrigue of this next piece had me riveted; Discovery manifested a careful, slow and explorative styled progression, one that reminded me of Timothy Wenzel at times, but Colainnia’s artistic genius pushed the musical ball even further, and created an almost soundtrack of a musical narrative that simply would not allow you to leave its court.

The opening to this next song was so wonderfully expressive and called Old Mountain Town. Strange really, because we’re about to visit some old mountain villages in our country in a couple of weeks’ time, and I am pretty sure that as we do so, this heart felt melody will still be running its course through my mind, this is with ease one of the most artistic pieces off the album without doubt.

One of my favourite parts of any new album is the title track, and that is where we are right now, lying in the arms of the creator and his creation that all was birthed from, the composition Mysteria. This is a powerful opus packed with suspense and intrigue and performed with a colourful flourish by the artist; this is a full flowing musical moment that is simply blissful to behold.

The penultimate offering off the album is called Reconnections, and this last but one treat has a real heart-warming feel to its manifestation. There is a charm about this piece that is so warming to the touch, a memory palace of a composition that has a crafted reflective arrangement built into its proud elaborate construction.

Our final parting gift from the artist is called Dreaming, this concluding musical present is a sensitive presentation, and a track that allows us as listeners to be grateful for the journey we have taken with the musician this time around, a classy way indeed to end the album.

Mysteria by Louis Colaiannia is a vast body of work with many memories and many moments that are completely unforgettable, here Colaiannia allows his muse full reign of his artistic skill set, and the result is one of the finest albums he has ever produced, and simply a must for lovers of truly good contemporary instrumental music.

Posted by Steve Sheppard at 4:16 AM