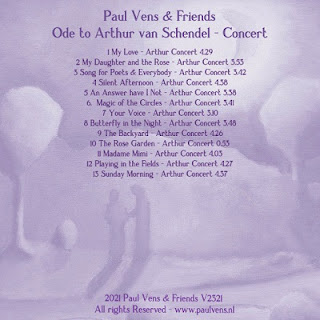 There is something so very moving about this latest album by Paul Vens & Friends, this latest live release Ode to Arthur Van Schendel Concert gifts us a performance dedicated to the Dutch writer, a man who created works of stylish short stories and novels, his craft was created from a romantic and almost classical way, and there can be no doubt that Paul Vens and his creators have manifested something so very respectful and reflective to pay homage to the writer with here.

I was immediately struck with the influences that would pour out of the music; yes there is a heavy folk ethic here, yes that blissful and peaceful New Age element comes through, but on the opening track who would expect me to reference Richie Blackmores Rainbow and a piece called Rainbow Eyes, and for me the opening My Love seals that symbiosis of musical magic, of acoustic guitar, gentle vocals of love, and flute.

This album is deeply romantic and sealed in the years of tenderness and sincerity, listen to tracks like An Answer have I Not, a sensitive and heartfelt compositions that really influences the emotions.

Then there is Butterfly in the Night, a track with a cross 60’s feel, mixed with a little Harry Chapin. Once more we hear a blissful combination of flute and acoustic guitar, one that reminds me of another Dutch band in Focus, then one can literally float into the arms of this next opus of charm entitled Playing in the Fields, it indeed took me back to my youth, when we used to escape from our parents’ home and meet up in the fields at midnight to play, I’ll just say it was a different world back then, this piece is very warm and charming to bathe within, and a song beautifully performed on acoustic guitar by the artist, one that is emotive in its content and memory filled, almost like a back pack that contains all the rose tinted glasses of your great days past.

Ode to Arthur Van Schendel Concert by Paul Vens & Friends is a 13 track release that will take you to so many parts of your life’s already well-worn footpaths of memory tide and time. This is a beautiful album that deeply moved me, I’m not Dutch, but that hardly matters when you have such heart of the sleeve performances like this to enjoy, for me it reminded me of when I was young, with my guitar trying to express my emotions, something I would fail to do truthfully until 40 years later.

It is an album that has been created with such a high level of sensitivity that it is almost palpable, and also unmistakeable in its desire to pay respect to a writer whose works were of an equally in-depth and sensitive nature in structure and composition. This latest release is a mixture of both folk, new age and acoustic progressive rock of the late 60’s, and thus should appeal to a very wide ranging audience, personally for me I found so much within this release, that I have a feeling I will be popping back from time to time, as the days and months roll past, a very emotional and heart felt release indeed.

Posted by Steve Sheppard at 1:14 AM