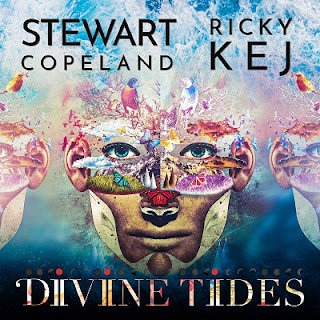 What do you get when you place two Grammy winning artists together, one an Indian music composer of legendary status, and the other a rock musician whose work is as stunningly brilliant today as it was in the decades his band flourished with an untouchable sense of perfection, the result is a magical creation of almost spiritual proportion, one that will shake the musical world to its roots, this is what can at the very least be said of Stewart Copeland (Police) & Ricky Kej and their brand new offering Divine Tides.

From its early beginnings it is easy to see that the listener has an album here that is of great quality and texture, the opening foray of Wonders Of Life carries one on a veritable journey through the mysteries and wonderful fluency of life’s unrestricted ambience, if we would only let it be that way. Copeland behind the drums has always been a masterful sentinel of percussion, combine that with the tapestry of Kej’s colourful influences and you have a track that is bathed in a radiance that is so very palpable indeed.

This nine track release is caressed and finessed with such a great level of professionalism from a colourful array of musicians from around the world, and one of them is a man known very well by us here at One World Music Radio in Devan Ekambaram, who beautifully supplied the choral vocals for this track, after the quite breath taking lead vocals from the magical voice of Varijashree Venugopal, in what would be my personal favourite from the album on the piece Himalayas.

Divine Tides is a pastiche of crafted genius, a collection of blissful wonderment, and notes of pleasure can be found in tracks like I Am Change, with standout performances on sitar by Sumarani, a delicate pleasure indeed, and a nod of inspiration and appreciation must go to Santosh Chandran whose guitar in the composition Ghandi was simply sublime.

The album is concluded with the arrangement Mother Earth which is another favourite of mine; I had just taken a moment out to watch two tornadoes dance around in a symbiotic tango out at sea, and enjoyed the wonderment of this moment of nature that only our mother can provide with such a purpose. This final offering built and progressed with a sensitive but onward energy, manifested wonderfully by the artists.

Divine Tides by Stewart Copeland & Ricky Kej is indeed a creation of outstanding natural beauty, packed with Eastern, Indian and global flavours, and celebrating all that is good and grand about our home and our species, it is a scenic soundscape of crafted magic that has been brought into reality by two of the world’s most thoughtful and creative composers. Divine Tides by Stewart Copeland & Ricky Kej is a textured tapestry of tone that demands to be listened to at all costs, and an award winner with absolute certainty.

Posted by Steve Sheppard at 2:56 AM