In My Own Time By Aleksandra Takala 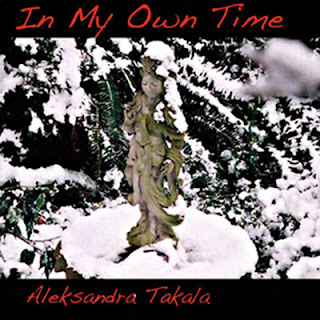 In My Own Time

Aleksandra Takala is a contemporary instrumentalist who brings a fine array of colours tones and rhythm to each creation she manifests. I first came into contact with her music back in 2018 through the release Visions & Emotions, and her skills on the keyboard are some of the most intriguing and fascinating I have found in many a year. The good news is that we get to take that train of wonderment once more, through the refrains of her latest release In My Own Time.

The beginning of the album is a pastiche of moods and onward energies; Takala manifests a track of great addiction through her composition Spanish Isle, a Latin guitar sets the scene and a truly addictive forward movement with the keyboards drives the piece ever onwards in the most colourful of ways.

Suite Nightmares & Daydreams is a clever and very inspiring composition, the motifs manifest a strange world where anything could and possibly will happen, the pertinent use of crescendo is crafted and this deft mystical and mysterious composition just grows and progresses with such ease and great skill as it unfurls.

Takala’s multi-instrumental approach gifts us so many opportunities to grow with the music; this was expressed beautifully on one of my favourite tracks entitled Helpless To Help. The symphonic nature of this creation was simply stunning and deeply moving as well; the symbiotic partnership with the piano built a grand arrangement, one that you could with ease fit into a dramatic scene from a movie.

Arriving on our musical doorstep next is the track En Tiempo. This is a magical reverie, one that builds and progresses with an ebullient energy, but contained within a tapestry of movement and motion. Another wonderfully fluent piece from the artist, and one of those tracks that you will keep on sneaking back to from time to time, it is that addictive.

The cinematic character of this album must not be overlooked, it adds to the overall class of the creations within. Take the short form Big Sky Ride as an example, my first thought on hearing this was like watching the clouds fly past on a plane journey in bright sunshine, an idyllic offering indeed, but much could also be said about the following musical narrative entitled, A Tribute To The People, and at just short of 7 minutes the second longest offering from the album too. The percussion here elevated the piece beautifully as did the bass and keyboards giving the track a wonderful collective feel, the flute sounds added a grounding layer of an almost ethnicity to its overall composition.

Good things they say come in small packages; this must be true as I simply adored Song of the Redwoods. Here can be found around two and a half minutes of a peace filled reverie that almost sways in a sun kissed environment of the day, the performance on keyboards by the artist here is utterly delightful, and literally raises the spirits.

A moving and emotive composition is up next, it is called A Time To Say Goodbye. The artist reaches in deep and manifests something so emotionally tender it is heart rendering in its structure, the bells bid a farewell perhaps on a piece that contained the memories of something so dear, now no longer here.

It’s a NEW DAY, yes it is, the juxtaposition of this offering and the last one is palpable, but nerveless a piece to run up the hill to and shout with pleasure and happiness to the world below can be found here, the progression on piano could be just that indeed, this is one of those songs that is always much needed on an album, and certainly one that lifted my January mood.

As we move onwards into the latter quarters of the release, we come across a piece that reminded me of the soundtrack to an old black and white film noir movie, this song had a delicious dance styled ethic and an interesting traditional European motif too. Dance Of Delight is indeed one of those songs that you may wish to visit many times over, just to experience that vast plethora of musical nuances that can be found within.

Our penultimate offering is entitled Silva's Ride, this last but one arrangement is a clever weave of movement and motion in a soundtrack style, I must also say that Takala’s presentation here with a sumptuous bass and soft but purposeful keyboards, were simply addictive to bathe within, a true mixture of Contemporary Instrumental and Neo Classical can be found here.

So we finish with a very classy and riveting cinematic composition entitled Masada Overture. This long form opus was like a movie all of its own, at times reverberating from the very depths of southern Israel, and its grand and vast sweeping soundscapes could easily come from the huge fortress that stands overlooking the Dead Sea, this was indeed a wonderfully powerful and descriptive way to conclude the album.

In My Own Time by Aleksandra Takala has to be one of the most inspirational contemporary instrumental albums I have heard for many a year, filled with a vast range of emotions, locations, dreams and fears, here is an imposing release, with patterns so grand and complex, and from its grandiose contents comes an album that is with ease the best work of the artist thus far, and one that will very much please the ranks of fans who simply adore all that is good in instrumental music.

Posted by Steve Sheppard at 7:47 AM