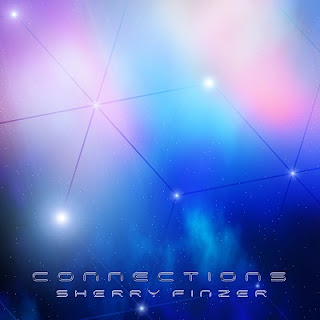 The fluency of Sherry Finzer as a flute performer knows no bounds; her smooth pertinent and deeply moving performances have been a constant source of inspiration and appreciation over many years now, in fact since Sanctuary, when the bells of 2009 rang softly in my ears with my first connection to her music.

Here on her latest creation entitled Connections, Finzer manifests the largest collection of works ever on one album, with no less than an amazing 17 pieces on one release. The haunting refrains of Resilience starts our bliss filled journey, whilst pieces like Homecoming, seems to swirl around us and fill each and every musical pore with a baited sense of anticipation.

Finzer is an artist that feels her creations right down to their the anatomical level, and one can sense and feel that symbiotic approach on offerings like Red Hawn Hill and the almost classical refrains of Highland Waterfall, a track that pan himself would have loved to have played on a mid-summers night, dreaming of days as of yet to unfurl.

Connections by Sherry Finzer is the third of her solo flute collections series that have manifested into reality at The Tank, and a more breath taking release in this genre you would be hard to find, especially when you listen to compositions like ethereal and emotive The Crossing Place, almost a call or anthem for those about to pass onto the next dimension, and the concluding track is indeed the perfect ending opus and called Journey With Spirit, a song that contains a lightness of energy and essence, an celebration of release and freedom perhaps.

Connections by Sherry Finzer will no doubt become one of the iconic releases in this genre, solo flute, like solo piano, is a genre that is dense with many offerings, but Connections by Sherry Finzer is a release that stands head and shoulders among the many, and is without doubt one of the most professional offerings of this style I have heard for quite some time, a release of outstanding natural beauty indeed.