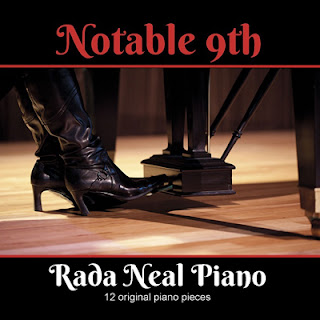 So, what is the connection that both pianist Rada Neal and global explorer Marco Polo have in common? The answer is that they both believe that the journey, not the destination is the most important reason for taking a voyage, whether it’s across the globe, or in the creation of a new solo piano album.

The latter is of course the result of Rada Neal’s efforts, it is indeed an album that creates such calm and tranquillity that it is a pleasure to board its decks and sail across an ocean of musical fluency.

Notable 9th by Rada Neal has 12 simply delicious solo piano tracks that will effortlessly make your day, like the charm and sweet surrender of the opening piece entitled Just a Whisper, or the reflective tones of one of the most emotive pieces off the album entitled Nostalgia.

One of my personal favourites would be the moody and creative Falling Shadows, a wonderful performance depicting the close of day, and the crawling autumnal shadows across the landscape of time.

There are some sublime moments of a heart felt presentation on pieces like the honest and passionate Romance, and the truth seeking reality of one of the most emotional compositions in the deepness of the track, Still a Memory.

There is perhaps a little Celtic influence on the penultimate offering of Banshee, a song that has all the speed and grace of the woman from the fairy mound.

The album is concluded by one of the most beautiful compositions I have heard for piano in a long while, and called Tranquillity, classic new age piano at its best can be found here, with a melody that could have been created by the master of the genre in one David Lanz, what a great way to end the album indeed.

Posted by Steve Sheppard at 2:37 AM