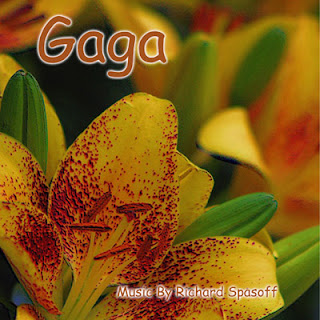 The uniqueness of GAGA by composer Richard Spasoff spans several genres and touches different landmarks as it goes; this eight track album is inventive, artistic, and at times even experimental.

The opening piece GAGA, our title track, would turn out to be one of my personal favourites, this slow gentle build and progression giving birth to a truly beautiful melody and harmonic resonance, and at times almost symphonic in nature, this is something that we can all enjoy with ease, and for me I found a reflective sense of emotion deep within the weave of the song too.

Tracks like Spiritual Awakening and Jazzy Moon retain a style similar to Avant - garde Jazz, but not free form, there is a freedom here that is obvious, but hidden between the arrangements is a pattern that weaves its own clever narrative.

Of the eight tracks that you will find within this fresh and ground breaking new album by Richard Spasoff, you will note little gems like the emotive tones of Agape, a track so beautiful and at times quite ethereal with its angelic vocalisations and soothing keyboards.

The penultimate track is entitled Raindrops from Heaven and perhaps the symbols illustrate this for us, once more one can feel the emotion within this composition, and a piece that one can truly say is played with the heart on the sleeve of honesty.

GAGA by Richard Spasoff is an album that has been created from a musical heart that cries to be heard, there are tracks within this release that tell a tale and retain a somewhat personal narrative, and ones that reveal a desire to manifest a mixture of experimental music, melded with several tracks that are incredibly moving.

Posted by Steve Sheppard at 5:22 AM