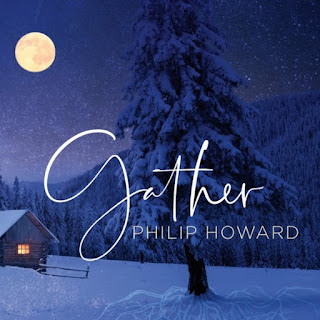 Penning a Christmas album is not the easy task many think it to be, originality and freshness of compositional structures and arrangements, are paramount to a seasonal albums success, and I am elated to say that without a doubt Philip Howard and his new album Gather has done that so very beautifully indeed.

The first gift to be unwrapped from under our musical Christmas tree is the timely classic Away in a Manger, this is one of my favourite tracks from the album, listen to the beginning, the first few bars almost hold a slight Beatles Strawberry Fields motif, this is so craft-fully done, the piano performance of this piece, goes on to be one of the smoothest offerings of this arrangement that I have heard for simply ages.

Carol of the Bells is such a well-known piece, and for me an emotive offering that literally makes me tingle with anticipation, Howard brings a wonderful flourish to his performance that is so enjoyable to listen too; this is one of those tracks that raises the excitement for a happy Christmas time, and all that it brings with it.

This album is a cornucopia of many delights, and one of them is this simply marvellous version of O Come, O Come, Emmanuel. The piano of Howard creates a wonderfully mood-filled vibe on this well-known composition, one that has a sparkle to a performance that feels so grand and empowering, a classy rendition indeed.

A combination is now upon us as we listen to Silent Night, Bring a Torch, all mixed so craft-fully, and a performance by the artist that is deeply moving and powerful to dive deep into. This is an arrangement that is as pleasing to the ears as is the first snow is to the eyes, the use of a slight pause so wonderfully executed too.

Speaking of the weather at Christmas, this is utterly the best original slice of solo piano I have heard for years, one that reflects the subject matter so well and called The Silence of Snow. I particularly love the fluency in this original piece by Howard, one that is almost neo classical at times.

What Child Is This? Is a timeless piece that many will know by another name as well, here Howard tempers the pace and manifests a tempo that almost has us as listeners holding our breath in anticipation, and then releasing with joy at the empowering chorus.

I have heard a few versions of this classic so far this winter, but this arrangement has to be one of the best instrumental creations ever, as we listen to Ave Maria (Feat. Giorgi Khokhobashvili). The strings bring a whole new dimension to a track that is already beyond beauty; Howard has pulled off a master stroke here, on what must be the most stunning offering off the album.

So let’s have another combo, this time around it is the turn of the pianist to give us Still, Still, Still - The First Noel. This one reminded me of my parents, my father used to love to sing this at Christmas time, and hearing this again reminds me of the power of the moment, and even more so the power of a really good performance.

We are gifted by our musical Santa another new and original offering, and this time we have a little joy sent our way, as we sit and listen to Gather, the title track from the album. Howard pulls of a soothing musical presentation here on this original offering, the gentleness of performance here was, and is so pleasing to enjoy.

Our penultimate offering is a piece that most will remember from some stage in their lives during a pre-Christmas build-up of sorts, and called O Holy Night. A charming performance on piano can be found here, one that retains the energy of all that has gone before it.

How could you finish with anything else other than Auld Lang Syne, a timeless opus of memories, and a reservoir of happy times to always cherish, a stylish end to a very classy album indeed.

Gather by Philip Howard is one of the most convivial and hospitable seasonal albums I have heard for ages, his approach to this project has brought a wonderful sense of warmth to the album, a release packed with welcoming versions of timeless Christmas classics, and a couple of truly sublime original pieces too, that all go to make Gather by Philip Howard, one of the best Christmas holiday albums I have heard for many, many years.

Posted by Steve Sheppard at 3:01 AM